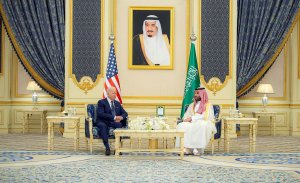 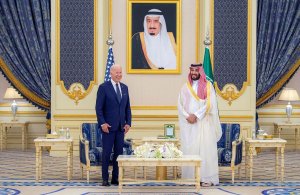 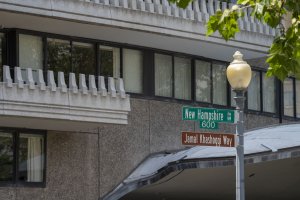 U.S. News // 3 weeks ago
Families of 9/11 victims urge Trump to cancel golf club event
Families of people killed during the 9/11 terror attacks have sent a letter to former President Donald Trump urging him to cancel a golf tournament backed by Saudi Arabia at his club in Bedminster, N.J.

World News // 3 weeks ago
Biden presents framework for U.S. role in Middle East at summit
President Joe Biden laid out his vision for the United States' role in the Middle East at a summit in Saudi Arabia with Gulf state leaders on Saturday, the final day of his four-day trip though the region.

World News // 3 weeks ago
Biden meets Palestinian leader in West Bank: 'We will never give up on peace'
U.S. President Joe Biden traveled to the West Bank on Friday and met with Palestinian Authority President Mahmoud Abbas on his four-day visit to the Middle East.

U.S. News // 4 weeks ago
Biden in Israel: 'Our relationship is deeper, stronger than it's ever been'
President Joe Biden visited Israel's Yad Vashem Holocaust Remembrance Center in Jerusalem as he wrapped up Day 1 of a four-day tour in the Middle East to reaffirm relationships in the region.

Nooks started his musical career in the youth choir at his church, and moved on to perform at school concerts and talent shows. After first recording professionally in 1974, Nooks first found success performing under the name Prince Mohamed, as a deejay on discomix tracks for producer Joe Gibbs, notably on Dennis Brown's 1978 hit "Money in my Pocket", and "How Could I Leave", as well as "Light Up Your Spliff" for producer Prince Tony Robinson. He moved on to work with other producers such as Alvin Ranglin and Bunny Riley. His first album, a joint effort with General Echo, People Are You Ready, was released on the United Artists subsidiary Ballistic in 1978. This was followed by African Roots, recorded the following year for producer Linval Thompson. He had a hit in Jamaica with "Forty Legs Dread", and the increasing violence in Kingston prompted Nooks to record a version of Little Roy's "Tribal War", now singing rather than deejaying, and released under his real name, which he followed with a cover version of Errol Dunkley's "Darling Ooh". Nooks would subsequently concentrate on his singing, releasing the Today album in 1981, although he reverted to Prince Mohamed in 1982 for an album with June Lodge. His singing gained comparisons with Dennis Brown, who he would later pay tribute to with a double album of Brown covers.

It would be 1997 before Nooks released another album, his self-titled collection resulting in three Tamika Reggae Music awards, but since 1997 he has been quite prolific, releasing a string of solo albums, as well as albums shared with Glen Washington, Roland Burrell, Singing Melody and Lukie D. He continues to perform and record, mixing reggae and Gospel.

FULL ARTICLE AT WIKIPEDIA.ORG
This article is licensed under the GNU Free Documentation License.
It uses material from the Wikipedia article "Prince Mohammed."