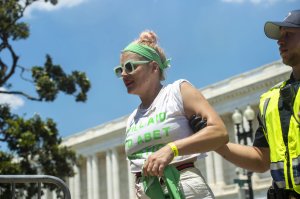 U.S. News // 2 weeks ago
Texas abortion clinics weigh whether to relocate or refocus
A month after the U.S. Supreme Court overturned Roe vs. Wade, Texas' two dozen abortion clinics are slowly coming to terms with a future where their work is virtually outlawed.

U.S. News // 2 weeks ago
Judge blocks Kentucky abortion ban while lawsuit proceeds
A Kentucky judge ruled Friday to block enforcement of the the state's trigger law banning abortions while a lawsuit against the ban is being heard in court.

U.S. News // 1 month ago
South Carolina abortion ban goes into effect
A South Carolina law to restrict most abortions has gone into effect after a federal judge lifted a block put against it,

U.S. News // 1 month ago
Abortion-rights groups sue to stop 'trigger' bans in several states
Thirteen states have passed "trigger" bans that are to go into effect following the Supreme Court's decision to overturn Roe vs. Wade late last week, but several of those efforts were met with lawsuits Monday.

U.S. News // 1 month ago
Texas' abortion-rights movement sets its sights on the long run
The morning after the U.S. Supreme Court struck down Roe vs. Wade, stripping from millions the constitutional protection to seek an abortion, Texas state Rep. Erin Zwiener went out into her district to knock on doors.

Planned Parenthood Federation of America (PPFA), usually referred to simply as Planned Parenthood, is a non-profit organization that provides reproductive health as well as maternal health services in the U.S. and internationally. PPFA is an affiliate of the International Planned Parenthood Federation (IPPF) and one of its larger members. PPFA has its roots in Brooklyn, New York, where Margaret Sanger opened the first birth-control clinic in the U.S. She founded the American Birth Control League in 1921, which changed its name to "Planned Parenthood" in 1942. It has since grown and consists of approximately 174 affiliates and 700 health clinics in the United States and abroad.[3][4]

FULL ARTICLE AT WIKIPEDIA.ORG
This article is licensed under the GNU Free Documentation License.
It uses material from the Wikipedia article "Planned Parenthood."