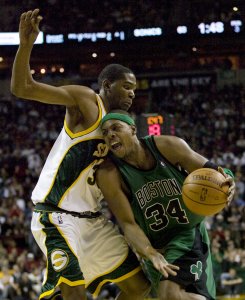 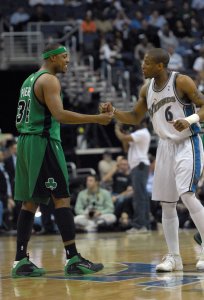 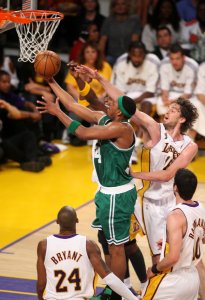 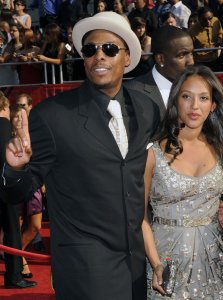 NBA // 1 year ago
Kawhi Leonard calls glass with fade-away winner vs. Nets
Toronto Raptors star Kawhi Leonard had the last word against the Brooklyn Nets, hitting a game-winner with a fade-away off the glass in the final seconds.

NBA // 2 years ago
Heat look to improve home mark vs. Nets
MIAMI -- The Miami Heat haven't recovered since LeBron James bolted for free agency in the summer of 2014.

NFL // 2 years ago
Knicks-Nets clash comes with big buildup
NEW YORK -- These days, the rivalry between the New York Knicks and Brooklyn Nets can be defined by rebuilding projects and getting their respective rosters on the road to playoff contention.

NBA // 2 years ago
Boston Celtics return to friendly confines after dropping two in Cleveland
Game 5 of the Eastern Conference finals tips off at 8:30 p.m. Wednesday at TD Garden in Boston.

I'm a guy who has been durable my whole career

I just think with the veteran guys we have around here and going through what we went through last year, we understand what it takes

They defended well and took us out of our offense

Paul Anthony Pierce (born October 13, 1977 in Oakland, California), also known as The Truth, is an American professional basketball player for the Boston Celtics of the NBA. He earned First Team All-America honors in his junior year at Kansas, and has been a starter every season since being selected by the Celtics with the 10th overall pick in the 1998 NBA Draft. He is a nine-time All-Star, four-time All-NBA team selection and also led Boston to the NBA Finals in 2008, and 2010, winning the 2008 NBA Finals. He was named the 2008 NBA Finals MVP in his first trip to the NBA Finals. Pierce also is one of only three Celtics, alongside Larry Bird and John Havlicek, who have scored over 20,000 points in their career with the Celtics alone.

Pierce was raised in Inglewood, California where he was the star of Inglewood High School's basketball team during his junior and senior years. He also participated in the 1995 McDonald's All-American Game alongside future NBA stars Kevin Garnett, Stephon Marbury, Vince Carter, and Antawn Jamison, and was a contestant in the game's Slam Dunk Contest, which was won by Carter.

Pierce averaged 16.4 points and 6.3 rebounds per game in his three seasons at the University of Kansas, where he majored in Crime and Delinquency Studies, and earned MVP honors in the Big 12 Conference Tournament in both 1997 and 1998. Pierce played for Hall of Fame coach Roy Williams at Kansas. He entered the NBA Draft after his junior year and was selected with the 10th overall pick in the first round of the 1998 NBA Draft by the Boston Celtics.

FULL ARTICLE AT WIKIPEDIA.ORG
This article is licensed under the GNU Free Documentation License.
It uses material from the Wikipedia article "Paul Pierce."
Back to Article
/