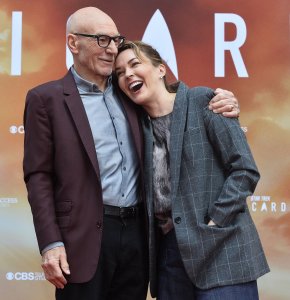 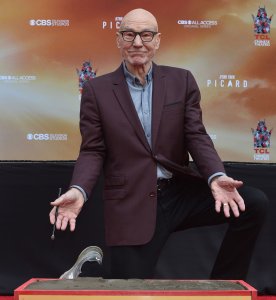 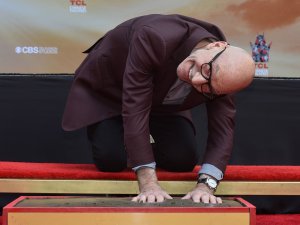 Entertainment News // 8 months ago
Emmy Awards: How to watch, what to expect
The 73rd annual Emmy Awards will air live Sunday from the Microsoft Theater in Los Angeles.

Movies // 1 year ago
'Book of Love': Sam Claflin, Veronica Echegui to star in romantic comedy
"Me Before You" actor Sam Claflin and "My Name is Juani" actress Verónica Echegui have joined the Sky Original film "Book of Love."

Patrick is a brilliant, wonderful, gorgeous man. Some think the difference in our ages says something about him, or us, or me. But to us it's never been an obstacle

The moment you don't (take your work seriously,) give it up

Then Sir Ian said he didn't know how to play either and I saw Bryan roll his eyes like, 'I can't believe I employed two actors, neither of whom can play chess,

I went to see him last week in his play

Sir Patrick Hewes Stewart, OBE (born 13 July 1940) is an English film, television and stage actor, and university chancellor. He has had a distinguished career in theatre and television for around half a century. He is most widely known for his television and film roles, such as Captain Jean-Luc Picard in Star Trek: The Next Generation and its successor films, Professor Charles Xavier in the X-Men film series, and as the voice of Avery Bullock in American Dad!, a character who is designed to look almost identical to Stewart himself.

Stewart was born on 13 July 1940 in Mirfield, in the West Riding of Yorkshire, England. He is the son of Gladys (née Barrowclough), a weaver and textile worker, and Alfred Stewart, a Regimental Sergeant Major in the British Army who served with the King's Own Yorkshire Light Infantry (KOYLI) and previously worked as a general labourer and as a postman.

In a 2008 interview, Stewart said: "My father was a very potent individual, a very powerful man who got what he wanted. It was said that when he strode on to the parade ground, birds stopped singing. It was many, many years before I realised how my father inserted himself into my work. I've grown a moustache for Macbeth. My father didn't have one, but when I looked in the mirror just before I went on stage I saw my father's face staring straight back at me."

FULL ARTICLE AT WIKIPEDIA.ORG
This article is licensed under the GNU Free Documentation License.
It uses material from the Wikipedia article "Patrick Stewart."