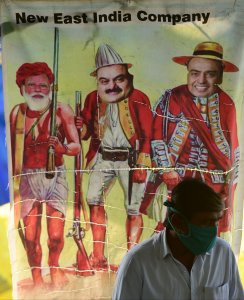 World News // 1 week ago
Japan's COVID-19 deaths drop 5% amid state of emergency during Games
Japan is staging the Summer Olympics during a state of emergency and without spectators with coronavirus cases surging though the situation nowhere nearly as dire elsewhere.

World News // 2 weeks ago
Britain's COVID-19 cases spike as restrictions ease
Britain is dealing with a contrasting coronavirus situation: surging cases despite nearly 70% of its population receiving at least one vaccine dose and plans to end all restrictions in England.

World News // 3 weeks ago
World's COVID-19 cases climb 12% in week; deaths up 1%
Coronavirus is surging in the world with a 12% weekly rise in infections and 1% gain in deaths after the outbreak had been largely contained with restrictions and vaccines.

World News // 1 month ago
COVID-19 eases in Asia, including India: weekly deaths dip 6%, cases 3%
Coronavirus deaths and cases are trending down in Asia, where the outbreak began 1 1/2 years ago in Mainland China and spiked most recently in India, as the global toll nears 4 million people.

World News // 1 month ago
COVID-19 surging in Russia; weekly world deaths drop 10%, cases 5%
As coronavirus subsides through much of the world, the pandemic is surging in Russia with record cases last week and the most deaths in three months.

World News // 1 month ago
Japan rejected summit with South Korea at G7, citing 'unsuitable conditions"
Japan's prime minister may have snubbed South Korean President Moon Jae-in and rejected an invitation to a bilateral summit on the sidelines of the G7 summit in Cornwall, according to Japanese press reports.

World News // 1 month ago
India experiences over 6,000 COVID-19 deaths in one day
India has recorded the highest daily body count since the COVID-19 pandemic began after nearly 6,200 deaths were attributed to COVID-19 in India on Wednesday.

Born in a middle class family in Vadnagar, a member of Rashtriya Swayamsevak Sangh since childhood, and an active politician since early in life having a masters degree in political science. In 1998, he was chosen by the leader of the BJP, L K Advani to direct the election campaign in Gujarat as well as Himachal Pradesh.

He became Gujarat's Chief Minister in October 2001, promoted to the office at a time when his predecessor Keshubhai Patel had resigned, following the defeat of BJP in the by-elections.

FULL ARTICLE AT WIKIPEDIA.ORG
This article is licensed under the GNU Free Documentation License.
It uses material from the Wikipedia article "Narendra Modi."
Back to Article
/