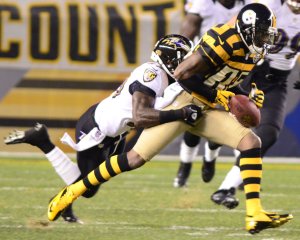 Top News // 3 years ago
The Almanac
On April 7, 2009, North Korean leader Kim Jong Il was re-elected to a third five-year term despite failing health since a reported stroke in August 2008.

NFL // 3 years ago
Eagles, Giants meet in pivotal NFL East clash
The defending Super Bowl champion Philadelphia Eagles are bumbling and stumbling along with a 2-3 record and two straight losses for the first time since 2016.

I don't know why the hell you asked me that question, because other people have. It's the first time I have answered it honestly

Burnell Micheal "Mike" Wallace III (born August 1, 1986 in New Orleans, Louisiana) is an American football wide receiver for the Pittsburgh Steelers of the National Football League. He was drafted by the Steelers in the third round of the 2009 NFL Draft. He played college football at Mississippi.

Wallace was born to parents Burnell and Sonjia Wallace in New Orleans, Louisiana. He attended O. Perry Walker High School where he played football on both offense and defense. During his senior year, Wallace had 60 receptions for 1,039 yards and 19 touchdowns. He also returned four punts and four kickoffs for touchdowns. Wallace set the school records for total points and kick return touchdowns.

FULL ARTICLE AT WIKIPEDIA.ORG
This article is licensed under the GNU Free Documentation License.
It uses material from the Wikipedia article "Mike Wallace."