NFL // 1 year ago
Saints talking new deal for WR Michael Thomas
Michael Thomas is one of the best receiving threats in the NFL and the New Orleans Saints are about to pay him accordingly.

NFL // 2 years ago
New Orleans Saints draft class review: Boston Scott may prove to be biggest catch
Here is a roundup and review of the New Orleans Saints' 2018 NFL Draft class, highlighted by a player who is most likely to breakout in his rookie season. 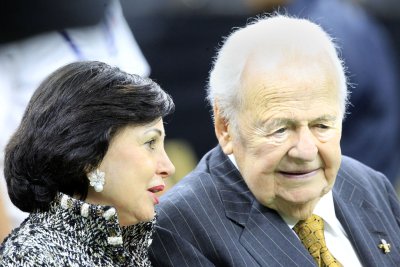 NFL // 3 years ago
Saints' Kamara in Bush/Sproles role could be fantasy football thorn
There must be enough footballs to go around in the New Orleans Saints backfield if Alvin Kamara is expected to get work behind Mark Ingram and Adrian Peterson.

Decisions like this are always very difficult ones to make

He's an impact player, and has been a key part of every offense he has played for -- both as a blocker and as a receiver

We are glad to have Jerry back in the fold, he is very familiar with our system

Mickey Loomis is the General Manager of the NFL's New Orleans Saints. He was awarded the NFL executive of the year for 2007. He attended Northwest Christian University in Eugene, Oregon, where he played basketball. He earned his degree in accounting from the University of Oregon.

Before coming to the Saints, Loomis spent 15 years in the Seattle Seahawk organization.

FULL ARTICLE AT WIKIPEDIA.ORG
This article is licensed under the GNU Free Documentation License.
It uses material from the Wikipedia article "Mickey Loomis."
Back to Article
/