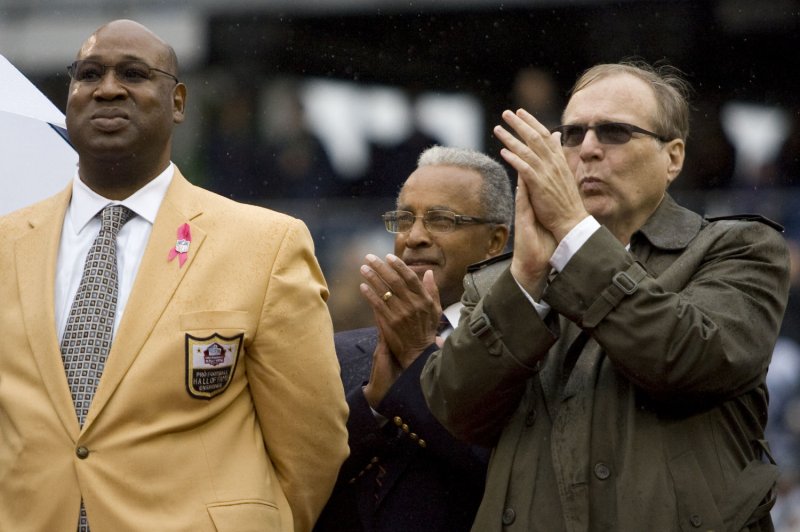 METAIRIE, La. -- The New Orleans Saints had Pro Football Hall of Famer Cortez Kennedy on their minds Thursday when they held their first open practice of the first week of OTAs.

Kennedy, a former Seattle Seahawks defensive tackle, served as an adviser to Saints general manager Mickey Loomis for many years. He also was a close friend of many Saints staff members before his unexpected death Tuesday in Florida at age 48.

Saints players wore a large "96" decal on their helmets for Thursday's practice, and coach Sean Payton had the number written on his ever-present visor when the team took the field.

"If you didn't know better and you saw him, you might think he worked here," Payton said after practice. "My first time here interviewing with Mickey, we had dinner, and Cortez would always make sure if it was a nice place that he was there to join you."

Kennedy was with the Seahawks when Loomis was a member of Seattle's front office, and the two formed a friendship that included Kennedy being a godfather to one of Loomis' four children.

"He was just here for the draft," Payton said. "All of us are devastated, that would be the way to describe it. It just was so sudden. It's tough. ...

"I think Mickey said it best: As great a player as he was -- and trust me, if you had to pull a starting lineup out of the Hall of Fame on defense, he would be in the starting lineup -- he was that good a guy off the field. He was friendly to everybody and will be missed."

Ingram, Snead and Kuhn watched the practice, but Fairley was not seen by reporters.

Unger recently underwent surgery for a Lisfranc separation in his foot. Hill was not expected to be on the field as he continues his rehab from a broken fibula sustained late last season.

--One of the players who drew the most attention was running back Adrian Peterson, who was signed just before the draft to be part of Payton's rotation at the position along with Ingram and possibly Travaris Cadet and rookie Alvin Kamara.

Even with Ingram sitting out, the Saints didn't run the ball a lot. However, that was expected with teams not allowed to hit during OTAs.

Peterson did work on catching passes out of the backfield while getting the bulk of the snaps with the first-team offense in seven-on-seven work and team drills.

Peterson wasn't called on to catch the ball much in the Minnesota Vikings' offense, but that will likely change with the Saints. Peterson caught 241 passes in 123 career games with the Vikings, but Ingram has 98 receptions and four touchdowns in the past two seasons alone.

Peterson had one pass fall to the ground Thursday, but he appeared comfortable for the most part in a new offensive system and in his new surroundings.

"When you get out here without any type of game planning, you are really trying to roll the players through and expose them all to the different concepts we have," Payton said. "But yes, (Peterson) is comfortable catching the football in space.

"He is on top of the protections, much the same way as you would expect Mark or any of those backs to have a variety of things that they can do."

--Veteran tackle Bryce Harris, a former Saint, made the most of his tryout during the team's rookie minicamp two weeks ago.

Harris was signed to a contract after the tryout and will get a chance to compete for a roster spot with the goal of adding depth to the offensive line.

Harris played for the Saints from 2012 to 2014 and appeared in all 16 games in 2013 and 2014 with three starts. Since being released by New Orleans in 2015, he played with the Miami Dolphins, Jacksonville Jaguars and Atlanta Falcons.