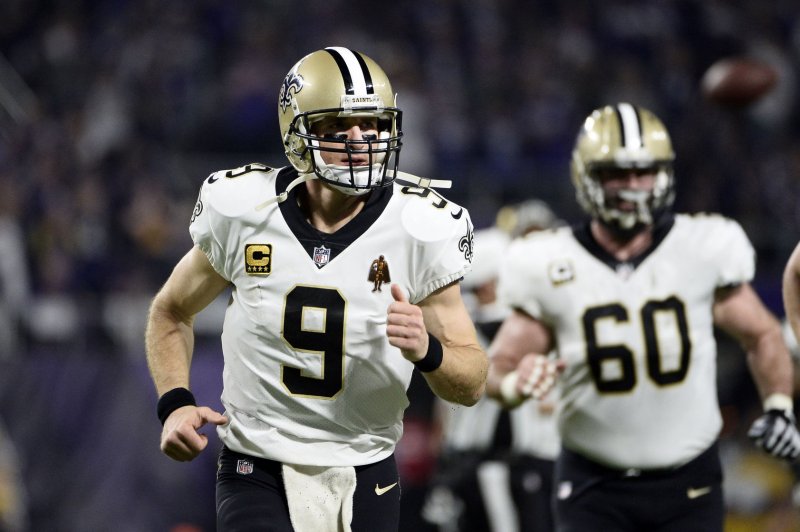 New Orleans Saints quarterback Drew Brees runs off the field after the first half of the NFC Divisional round playoff game against the Minnesota Vikings on January 14, 2018 at U.S. Bank Stadium in Minneapolis. Photo by Brian Kersey/UPI | License Photo

"I don't see that being a long, drawn-out process, and I think we've been here before," Payton said at the NFL Combine on Thursday, per the Times-Picayune of New Orleans. "I think that's going to get done fairly smoothly."

Payton said Saints general manager Mickey Loomis already has met with Brees and also is expected to sit down with the quarterback's agent, Tom Condon, this week.

Brees signed a five-year contract extension worth an average of $24.5 million per season that can be voided on March 14, making the 39-year-old an unrestricted free agent as the team carries a cap hit of $6 million and dead cap value to $18 million.

"There's no assumptions, but I'm fairly confident," said Payton. "It's not something I've been focused on a lot."

A former Super Bowl MVP and 11-time Pro Bowl selection, Brees has said he wants to remain with New Orleans. He told ESPN before the Pro Bowl in January that he's "not going anywhere else."

Brees completed a career-high 72.0 percent of his passes for 4,334 yards and 23 touchdowns while leading the Saints to an 11-5 regular-season mark. The touchdown total, however, was his fewest since 2007.

He led the Saints to a 24-23 lead over Minnesota with 25 seconds left in the NFC divisional-round playoff game before the Vikings scored the winning touchdown on a 61-yard pass play with no time left.

A second-round selection in the 2001 NFL Draft of the then-San Diego Chargers, Brees has thrown for 70,445 yards with 488 touchdown passes and 228 interceptions in 248 career contests.

NFL // 1 hour ago
Wilson, Broncos earn ugly win over Garoppolo, 49ers
Sept. 26 (UPI) -- Russell Wilson and the Denver Broncos struggled again on offense, but came alive late to earn a narrow victory in one of the lowest-scoring NFL game so far this season, beating the San Francisco 49ers 11-10 in Denver.

NFL // 14 hours ago
Dolphins hold off red-hot Bills, improve to 3-0
MIAMI GARDENS, Fla., Sept. 25 (UPI) -- The Miami Dolphins were out-gained by nearly 300 yards and held a time of possession deficit of 20 minutes, but pulled off a win over the Buffalo Bills with a clutch defensive finish Sunday in Miami Gardens, Fla.

NFL // 3 days ago
QB Joe Burrow says Bengals 'not panicking' after starting 2022 season 0-2
Sept. 22 (UPI) -- Quarterback Joe Burrow said the Cincinnati Bengals aren't panicking and called on everyone to "relax" about the team's 0-2 start to the season and the constant duress he's faced on the field since last year.