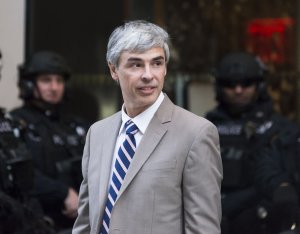 World News // 1 month ago
Forbes adds 500 newcomers to billionaires list amid pandemic
Forbes' annual World's Billionaires List grew to a record 2,755 people in 2021, adding $5 trillion in worth despite the economic downturn caused by the COVID-19 pandemic.

U.S. News // 1 year ago
President, CEO of Google parent company Alphabet to leave executive roles
Larry Page and Sergey Brin announced they will leave their roles as CEO and president of Google's parent company, Alphabet, and Sundar Pichai will become the CEO of both.

U.S. News // 2 years ago
U.S. sets record in Forbes' 'Billionaires 2019'; Bezos, Gates top list
The number of billionaires and their total net worth have dwindled in 2019, but the United States has more people on Forbes' annual ranking than ever before.

U.S. News // 2 years ago
Google helps users register to vote with new Doodle
Google is celebrating National Voter Registration Day in the United States with a new Doodle that will help users get to the polls in November.

We have gained expertise in designing and building large-scale, energy-intensive facilities by building efficient data centers

We are optimistic this can be done in years, not decades

We can deliver search results tailored to your interests, or promptly e-mail you new information on any topic

Lawrence "Larry" Page (born March 26, 1973) is an American computer scientist and industrialist who, with Sergey Brin, is best known as the co-founder of Google. As of April 4, 2011, he is also the Chief Executive Officer of Google, as announced on January 20, 2011. As of 2011, his personal wealth is estimated to be $19.8 billion.

Page was born in East Lansing, Michigan. His father, Carl Page, earned a Ph.D. in computer science in 1965 when the field was in its infancy, and is considered a "pioneer in computer science and artificial intelligence." Both he and Page's mother were computer science professors at Michigan State University. Page is Jewish on his mother's side, and was raised without religion.

FULL ARTICLE AT WIKIPEDIA.ORG
This article is licensed under the GNU Free Documentation License.
It uses material from the Wikipedia article "Larry Page."
Back to Article
/