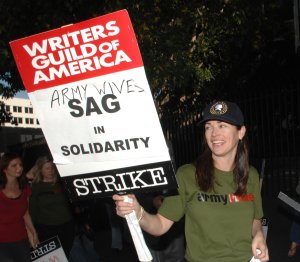 Kim Delaney (born November 29, 1961) is an American actress, perhaps best known for her role as Detective Diane Russell on the ABC drama N.Y.P.D. Blue. Early in her career, she endeared herself to daytime television viewers as Jenny Gardner, a hugely popular character on the ABC daytime drama All My Children, and the role which first brought her fame. After All My Children, Delaney appeared in numerous television and film roles, including the sole female lead in the dramatic series Philly and the female lead in CSI: Miami, starring alongside David Caruso, although she only appeared in 10 episodes before being written out due to lack of chemistry with Caruso. She currently stars on the Lifetime television drama, Army Wives.

Delaney, an Irish American, was born in Philadelphia, Pennsylvania, the daughter of Joan and Jack Delaney. Delaney's mother was a homemaker and her father a union official and former head of the United Auto Workers. She was raised Roman Catholic. Delaney grew up in Roxborough and has four brothers: Ed, John, Keith, and Patrick. While she was attending J. W. Hallahan Catholic Girls High School, she worked as a model for the Elite agency. After her graduation, she went to New York and found employment there as a model. At the same time, she studied acting with William Esper.

Delaney first became known for her stint as innocent teenager Jenny Gardner Nelson on the soap opera All My Children, which also was her first job. She played the character from August 1981 to August 1984, earning a Daytime Emmy Award nomination, as well as a loyal fan base; a profile of the actress a decade later noted, "Delaney left the soap in 1984, but fans still remember her as Jenny. 'They come up and will say they've followed everything I've done, and they stopped watching the show after I left, and they're so happy to see me on NYPD Blue, because they love the character."

FULL ARTICLE AT WIKIPEDIA.ORG
This article is licensed under the GNU Free Documentation License.
It uses material from the Wikipedia article "Kim Delaney."
Back to Article
/