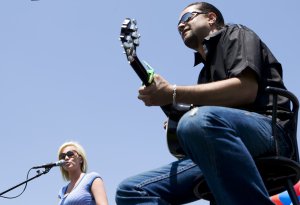 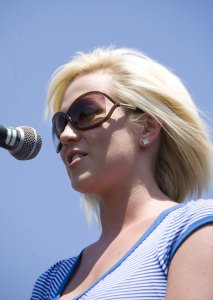 Entertainment News // 2 years ago
Rockefeller tree glistens with 50,000 lights, 500-pound star
Hundreds of thousands of people flocked to Rockefeller Center in New York to watch two kinds of stars -- the lighting of the massive tree and entertainers.

Music // 3 years ago
Kellie Pickler calls chance to perform for U.S. troops a 'beautiful blessing'
Country music star Kellie Pickler says one of the many highlights of her career is entertaining the U.S. troops who are serving overseas. 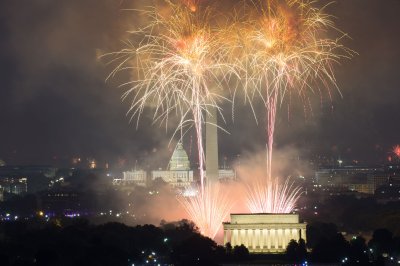 This is the first time I ever won anything in my life. I'm so excited. ... Thank you to 'American Idol.' You are the rocket that launched my career

Kellie has really touched my life with all she has overcome

I can actually wire a house. I started wiring when I was 5 years old. I would crawl under the house and run wires

Kellie Dawn Pickler (born June 28, 1986) is an American country music artist and television personality. She gained fame as a contestant on the fifth season of the Fox reality show American Idol, eventually finishing in sixth place. In 2006, she signed to 19 Recordings and BNA Records as a recording artist, releasing her debut album, Small Town Girl, later that year. To date, it has sold over 800,000 copies. The album, which was certified gold by the RIAA, produced three singles on the Billboard Hot Country Songs charts: "Red High Heels" at #15, "I Wonder" at #14, and "Things That Never Cross a Man's Mind" at #16. She released her self-titled second album in Fall 2008 and has produced the singles "Don't You Know You're Beautiful" at #21, "Best Days of Your Life" at #9 (which she co-wrote with Taylor Swift and her first Top 10 hit), "Didn't You Know How Much I Loved You" at #14, and "Makin' Me Fall in Love Again" at #30. In 2010, she was ranked as the 7th best American Idol alumnus.

Pickler was born at Stanly Memorial Hospital in Albemarle, North Carolina, to Cynthia Morton and Clyde "Bo" Raymond Pickler, Jr. Her mother left when Kellie was 2. She came back and got custody for two years, but the court returned Kellie to her grandparents when she was 12, as her father was in and out of jail during her childhood. Therefore, she was raised by her grandparents. She cites the major influences in her life as her grandfather, a former electrician Clyde Raymond Pickler, Sr., and grandmother Faye Pickler. She was raised in Albemarle, North Carolina, a small town near Charlotte, North Carolina. She has a half brother named Eric, a half sister, Courtney, and a half brother, Michael; however, she has never met Michael. After her grandmother's death from lung cancer in January 2002, she continued to reside with her grandfather and her younger sibling Eric until she became a contestant on Idol. Pickler graduated in 2004 from North Stanly High School in New London, North Carolina. She was a cheerleader and beauty queen. She sang "On the Side of Angels" by LeAnn Rimes at her high school graduation.

She worked as a waitress at a Sonic Drive-In franchise and, in 2005, she made an appearance on WSOC-TV's Gimme the Mike! Charlotte contest. She finished in second place. She participated in the Miss America circuit and won the "Miss Stanly County" pageant at age 17 and subsequently competed for Miss North Carolina 2004. She dropped out and later focused on paralegal studies.

FULL ARTICLE AT WIKIPEDIA.ORG
This article is licensed under the GNU Free Documentation License.
It uses material from the Wikipedia article "Kellie Pickler."
Back to Article
/