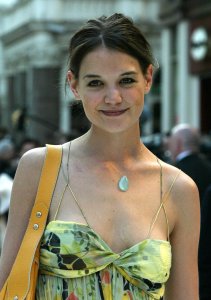 Entertainment News // 7 months ago
What to stream this weekend: 'Black Is King,' 'Muppets Now'
New streaming entertainment this weekend includes the Lollapalooza festival, a Beyonce special, return of The Muppets and movies starring Katie Holmes and Vinnie Jones.

Entertainment News // 11 months ago
Katie Holmes recalls 'intense' time after Tom Cruise divorce
Katie Holmes discussed the challenges of being in the spotlight and raising her daughter, Suri, following her split from Tom Cruise.

Entertainment News // 1 year ago
Met Gala 2020 theme is 'About Time: Fashion and Duration'
The Costume Institute Benefit will take place May 4 and feature Meryl Streep, Emma Stone and Lin-Manuel Miranda as co-chairs in 2020.

Entertainment News // 1 year ago
Katie Holmes on raising daughter Suri: 'We kind of grew up together'
Katie Holmes discussed Suri, her daughter with Tom Cruise, and her experience as a young mom.

Thank you for coming out to the show tonight. It was a real pleasure

I was so nervous, and I saw him out there, and he made me feel so much better

Cardi B, BTS, Taylor Swift to perform at the Grammy Awards

Kate Noelle "Katie" Holmes (born December 18, 1978) is an American actress who first achieved fame for her role as Joey Potter on The WB television teen drama Dawson's Creek from 1998 to 2003. Her movie roles have ranged from art house films such as The Ice Storm to thrillers such as Abandon to blockbusters such as Batman Begins.

In early 2005, Holmes began a highly publicized relationship with actor Tom Cruise. In June, two months after they first met, Holmes and Cruise were engaged. Their relationship made Holmes the subject of international media attention, much of it negative, including speculation the relationship was a publicity stunt to promote the couple's films. Holmes, who was brought up as a Roman Catholic, joined the Church of Scientology shortly after the couple began dating. In April 2006, Holmes gave birth to their daughter, Suri. On November 18, 2006, she and Cruise married in Italy.

Holmes was born in Toledo, Ohio. She is the youngest in a family of five children (four daughters, one son) born to Kathleen A. (née Stothers), a homemaker and a philanthropist, and Martin Joseph Holmes, Sr. (born 1945), an attorney specializing in divorces. She lived in the Corey Woods section of Sylvania Township, Lucas County, in a brick 1862 Italianate-style home. Holmes siblings are Tamera, Holly Ann, Martin Joseph, Jr., and Nancy Kay.

FULL ARTICLE AT WIKIPEDIA.ORG
This article is licensed under the GNU Free Documentation License.
It uses material from the Wikipedia article "Katie Holmes."
Back to Article
/