U.S. News // 2 weeks ago
Death toll rises as wildfires burn 3.4M acres in western U.S.
At least 15 people have died in California, Oregon and Washington as a result of wildfires burning throughout the western United States, which have destroyed hundreds of homes and prompted waves of evacuations. 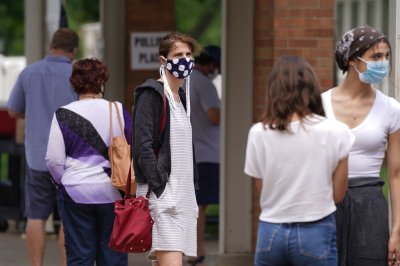 U.S. News // 1 month ago
42 governors ask Trump for COVID-19 extension for Nat'l Guard
A group of U.S. governors called on President Donald Trump Monday to extend funding for special deployments of National Guard forces to help with the federal response to the COVID-19 pandemic.

We have to be able to get to work every morning, and we can't see our ferry system shut down

Jay Robert Inslee (born February 9, 1951) is a Democratic American politician, currently serving as U.S. Representative from Washington's 1st congressional district. The district includes many of Seattle's northern suburbs in King, Snohomish, and Kitsap counties. Inslee and his wife Trudi were high school sweethearts and have been married since August 27, 1972. They have three sons, Jack, Connor, and Joe, and live on Bainbridge Island.

Born in Seattle, he graduated from Seattle's Ingraham High School and the University of Washington (B.A., Economics) and Willamette University College of Law. After practicing law for ten years in Selah, a suburb of Yakima, Inslee ran for the Washington House of Representatives in 1988 after the state legislature undermined a school bond that he had worked to pass after years of failure. Inslee was elected and served until 1992, when he ran for and was elected to the United States Congress representing Washington's 4th Congressional District in the central part of the state, a rural, agricultural-based constituency. In Congress Inslee passed the Yakima River Enhancement Act, a bill long held up in Congress by brokering a breakthrough with irrigators and wildlife advocates. He also helped to open Japanese markets to American apples, and fund and oversee the nation's biggest nuclear waste site at the Hanford Nuclear Reservation near Richland, Washington. He lost his bid for re-election in the Republican Revolution of 1994 in a rematch against his 1992 opponent, Richard "Doc" Hastings, a defeat often attributed in large part to his vote for the 1994 federal ban on semi-automatic firearms.

Inslee moved to Bainbridge Island, and briefly resumed the practice of law before running for governor in 1996 and losing in the primary to Gary Locke. President Bill Clinton subsequently appointed him regional director for the Department of Health and Human Services, a position he left to run again for Congress in 1998, this time in the 1st congressional district against two-term incumbent Rick White. His campaign attracted national attention when he became the first Democratic candidate to air television ads attacking his opponent, and the Republican congressional leadership, for the impeachment of President Clinton. Inslee won with 49.8% of the vote to White's 44.1%; his success was aided by the conservative third party candidacy of Bruce Craswell, husband of 1996 GOP gubernatorial nominee Ellen Craswell.

FULL ARTICLE AT WIKIPEDIA.ORG
This article is licensed under the GNU Free Documentation License.
It uses material from the Wikipedia article "Jay Inslee."
Back to Article
/