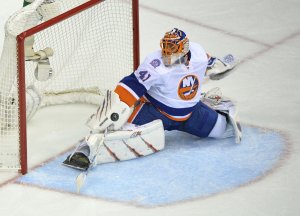 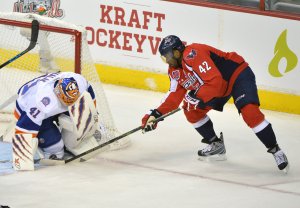 NHL // 1 year ago
Lightning beat Bruins in 2 OTs, advance to conference finals
The Tampa Bay Lightning have clinched a spot in the Eastern Conference finals after a dramatic double-overtime victory over the Boston Bruins in Game 5 of their second-round series in Toronto.

NHL // 3 years ago
Boston Bruins goalie Jaroslav Halak extends glove for sensational save
Boston goaltender Jaroslav Halak helped preserve the Bruins' lead with a phenomenal glove save in the second period against the San Jose Sharks on Tuesday.

NHL // 3 years ago
Bruins suddenly getting healthy ahead of clash with Preds
Bruins coach Bruce Cassidy may well have provided a clue to a key question as Boston gets set to host the Nashville Predators in a Saturday matinee.

NHL // 3 years ago
Ducks aim to start new road streak vs. Bruins
BOSTON -- Having fallen one short of matching the franchise record for consecutive road wins, the Anaheim Ducks visit what has been a friendly place for them on Thursday night.

I've been looking forward to playing in St. Louis ever since the trade was announced

Jaroslav Halák (Slovak pronunciation: ; born May 13, 1985) is a Slovak ice hockey goaltender currently playing for the St. Louis Blues of the National Hockey League (NHL). Halák was the 271st overall pick by the Montreal Canadiens in the 2003 NHL Entry Draft.

In the midst of a stellar season with the Montreal Canadiens' American Hockey League (AHL) affiliate, the Hamilton Bulldogs, Halák was called up to the Canadiens on February 15, 2007, after an injury to Montreal's starting goaltender, Cristobal Huet. At the time of his call-up, Halák had a 2.00 goals against average (GAA) with the Bulldogs, the lowest in the AHL. He played his first NHL game on February 18, 2007, stopping 31 shots in a 3–2 road win over the Columbus Blue Jackets. Halák earned his first career NHL shutout on March 20, 2007, making thirty saves to give the Montreal Canadiens a 1–0 victory over the rival Boston Bruins.

Halák's great play towards the end of the 2006–07 NHL season helped Montreal in their fight for a playoff spot despite the injury to Huet. Halák then played for Team Slovakia in the 2007 Men's World Ice Hockey Championships, starting 2 games and earning a 1-1 record. The Slovaks finished in 6th place.

FULL ARTICLE AT WIKIPEDIA.ORG
This article is licensed under the GNU Free Documentation License.
It uses material from the Wikipedia article "Jaroslav Halak."