Blues lock up Halak for 4 years

Montreal Canadiens goalie Jaroslav Halak blocks a shot with his pads in the second period of the Candadiens 5-2 win over the Pittsburgh Penguins in game seven of the NHL Eastern Conference Semi Finals at Mellon Arena in Pittsburgh on May 12, 2010. UPI/Archie Carpenter | License Photo

The Blues obtained Halak, 25, from Montreal in a June 17 trade that sent forwards Lars Eller and Ian Schultz to the Canadiens.

Halak produced a 26-13-5 record with a 2.40 goals-against average and five shutouts during the regular season for Montreal and helped them reach the Eastern Conference finals. He ranked ninth in the NHL in GAA and fourth in save percentage (.940).

"Jaroslav will be a big help for our organization moving forward," Blues General Manager Doug Armstrong said. "He has made a great commitment to the Blues as he enters the prime of his career."

"I've been looking forward to playing in St. Louis ever since the trade was announced," Halak said. "I believe in my abilities and hope to do some good things for the Blues."

Sports News // 15 minutes ago
Texas, Oklahoma to end media deals, signal departure from Big 12
July 26 (UPI) -- The University of Texas and Oklahoma University will not renew their sports media rights deals with the Big 12 Conference, the schools announced Monday. The move indicates that the schools plan to join a new conference.

Sports News // 1 hour ago
Coach surprises Argentine fencer with Olympics marriage proposal
July 26 (UPI) -- Maria Belen Perez Maurice went from the emotional low of losing her lone fencing event at the 2020 Summer Games to the high of being engaged in mere seconds when she accepted an on-air proposal Monday in Chiba, Japan.

Sports News // 4 hours ago
Saratoga, the 'Graveyard of Champions,' claims another Thoroughbred
July 26 (UPI) -- The "Graveyard of Champions" claimed another one during the weekend as long shot Maracuja edged previously undefeated Kentucky Oaks winner Malathaat in the Coaching Club American Oaks at Saratoga. 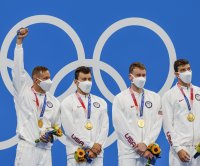 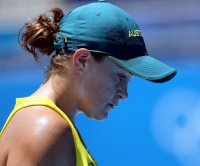