TV // 5 years ago
'Game of Thrones' alum Jonathan Pryce to play Bronte patriarch in BBC biopic
Jonathan Pryce is to play the Brontë sisters' father, Patrick, in a TV movie written and directed by Sally Wainwright, BBC One announced. 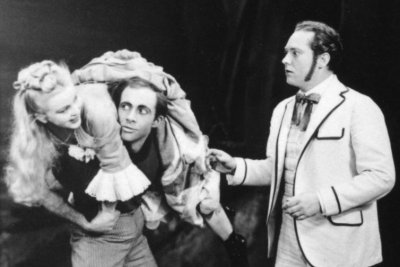 Entertainment News // 5 years ago
Jean Darling of 'Our Gang' fame dead at 93
Actress Jean Darling, known for starring in the silent "Our Gang" film shorts and the musical "Carousel," died at age 93 in Rodermark, Germany, on Friday.

Movies // 6 years ago
Jamie Bell stars as the Thing in 'Fantastic Four' photo
Jamie Bell stars as Ben Grimm, aka the Thing, in a new photo from the upcoming reboot of "The Fantastic Four."
Movies // 6 years ago
Stephen King's 'It' to film in summer 2015
A long-awaited adaption of Stephen King novel "It" will begin production in summer 2015 with Cary Fukunaga as director.
Entertainment News // 7 years ago
Michael Fassbender thanks McQueen for launching career
Michael Fassbender and Steve McQueen are a match made in movie heaven.
Movies // 7 years ago
Fassbender says he was 'in tears' reading '12 Years a Slave' script
German-Irish actor Michael Fassbender says he and his frequent collaborator, Steve McQueen, were on the promotion trail for their celebrated 2011 sex-addiction drama "Shame" when the British film director first mentioned he wanted Fassbender to appear in his next project, "12 Years a Slave."
Movies // 7 years ago
Joan Fontaine of 'Rebecca,' 'Suspicion' fame, dead at 96
Oscar-winning actress Joan Fontaine died of natural causes Sunday at her home in Carmel, Calif., her assistant said. She was 96.
TV // 7 years ago
Timothy Dalton joins 'Penny Dreadful' on Showtime
Welsh actor Timothy Dalton is to co-star in the new drama series "Penny Dreadful," which will begin filming this fall, Showtime announced Monday.

Jane Eyre (pronounced /ˌdʒeɪn ˈɛər/) is a famous and influential novel by English writer Charlotte Brontë. It was published in London, England in 1847 by Smith, Elder & Co. with the title Jane Eyre. An Autobiography under the pen name "Currer Bell". Harper & Brothers of New York came out with the American edition in 1848. It begins, "There was no possibility of taking a walk that day."

Jane Eyre is a first-person narrative of the title character. The novel goes through five distinct stages: Jane's childhood at Gateshead, where she is emotionally abused by her aunt and cousins; her education at Lowood School, where she acquires friends and role models but also suffers privations; her time as the governess of Thornfield Manor, where she falls in love with her Byronic employer, Edward Rochester; her time with the Rivers family at Marsh's End (or Moor House) and Morton, where her cold clergyman-cousin St John Rivers proposes to her; and her reunion with and marriage to her beloved Rochester. Partly autobiographical, the novel abounds with social criticism. It is a novel considered ahead of its time. In spite of the dark, brooding elements, it has a strong sense of right and wrong, of morality at its core. There are several Christian aspects underlying the plot that mould its character and essence.

Jane Eyre is divided into 38 chapters and most editions are at least 400 pages long (although the preface and introduction on certain copies are liable to take up another 100). The original was published in three volumes, comprising chapters 1 to 15, 16 to 26, and 27 to 38.

FULL ARTICLE AT WIKIPEDIA.ORG
This article is licensed under the GNU Free Documentation License.
It uses material from the Wikipedia article "Jane Eyre."
Back to Article
/