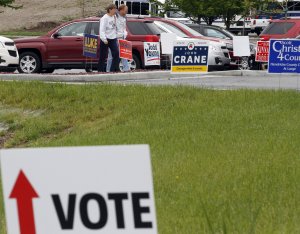 U.S. News // 2 months ago
Grand jury indicts lawyer with ties to Hillary Clinton's 2016 campaign
Special counsel John Durham has charged lawyer Michael Sussmann with lying to the FBI in 2016 concerning the investigation into links between Russia and the campaign of Donald Trump.

U.S. News // 1 year ago
Trump returns to his economy message at Pennsylvania rally
President Donald Trump returned to well-worn themes of economic prosperity and attacked his opponent Joe Biden, asking for the votes of suburban women at a rally Tuesday night in Johnstown, Penn.

TV // 2 years ago
'60 Minutes': Steve Kroft to retire after 30 seasons
Steve Kroft, the longest-tenured correspondent on "60 Minutes," will appear in his final segment of the show Sunday.

The United States is confident that the Special Tribunal for Lebanon will bring to justice those responsible for financing, planning, and carrying out the assassination of former Prime Minister Hariri

The United States pledges $6 million for the second year of the Tribunal's operations, subject to Congressional approval of the FY09 budget, in addition to the $14 million already contributed

I will either try to get more sleep ... or, you know, have somebody that, you know, is there, as a reminder to me

This is a tried and true technique of the Obama campaign, which has repeatedly shifted negative when they find the momentum working against them

From this war's very beginning, this administration has permitted thousands of heavily-armed military contractors to march through Iraq without any law or court to rein them in or hold them accountable

A native of Illinois, Hillary Rodham first attracted national attention in 1969 for her remarks as the first student to deliver the commencement address at Wellesley College. She embarked on a career in law after graduating from Yale Law School in 1973. Following a stint as a Congressional legal counsel, she moved to Arkansas in 1974 and married Bill Clinton in 1975. In 1977, Rodham co-founded the Arkansas Advocates for Children and Families. In 1978, she became the first female chair of the Legal Services Corporation. She was named the first female partner at Rose Law Firm in 1979, and was twice listed as one of the one hundred most influential lawyers in America. She was the First Lady of Arkansas from 1979 to 1981 and 1983 to 1992 and successfully led a task force to reform Arkansas's education system. She sat on the boards of Wal-Mart and several other corporations.

FULL ARTICLE AT WIKIPEDIA.ORG
This article is licensed under the GNU Free Documentation License.
It uses material from the Wikipedia article "Hilary Clinton."