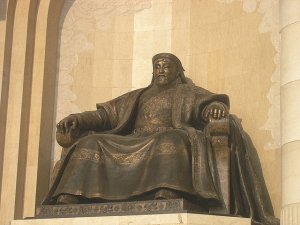 Entertainment News // 3 years ago
Google honors actor Omar Sharif with new Doodle
Google is celebrating the life of Hollywood film star Omar Sharif on what would have been his 86 birthday with a new Doodle.

Top News // 4 years ago
The Almanac
On Aug. 18, 1920, the 19th Amendment to the U.S. Constitution, guaranteeing women the right to vote, was ratified by Tennessee, making it the law of the land. The law took effect eight days later.
Outside View // 7 years ago
Outside View: Iranian horror movie turns reality
The author says he finds it far from amusing to see a U.S. president naively falling victim to such monstrous hostile intent as threatened by Iran
Odd News // 7 years ago
The almanac
UPI Almanac for Sunday, Aug. 18, 2013.
Odd News // 8 years ago
The almanac
UPI Almanac for Friday, May 31, 2013.
U.S. News // 8 years ago
Debt ceiling: The art of compromise seems to be a lost art in Congress
If compromise is an art, we probably shouldn't expect any masterpieces out of Congress.

I watched Genghis Khan and saw how he emerged from a small tribal leader to unify Mongolia, expand the kingdom's realm into areas populated by Han people and annihilate the Chin Dynasty

The alternative explanation would be that, despite the historically-recorded activities of Genghis Khan, his Y-chromosome did not spread, but that of an unknown man living in the same place at the same time did, to an unprecedented extent

He came to power by uniting many of the nomadic tribes of northeast Asia. After founding the Mongol Empire and being proclaimed "Genghis Khan", he started the Mongol invasions that would result in the conquest of most of Eurasia. These included raids or invasions of the Kara-Khitan Khanate, Caucasus, Khwarezmid Empire, Western Xia and Jin dynasties. These campaigns were often accompanied by wholesale massacres of the civilian populations – especially in Khwarezmia. By the end of his life, the Mongol Empire occupied a substantial portion of Central Asia and China.

FULL ARTICLE AT WIKIPEDIA.ORG
This article is licensed under the GNU Free Documentation License.
It uses material from the Wikipedia article "Genghis Khan."
Back to Article
/