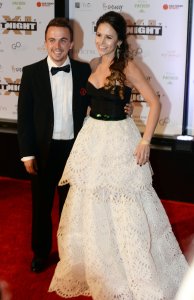 Entertainment News // 2 weeks ago
Frankie Muniz celebrates baby boy's birth: 'I love him so much'
"Malcolm in the Middle" alum Frankie Muniz welcomed his first child, a son, with his wife, Paige Price.

Entertainment News // 2 years ago
Frankie Muniz engaged to girlfriend after 'tough' week
"Malcom in the Middle" alum Frankie Muniz proposed to Paige Price following his uncle's death and the loss of his home.

TV // 3 years ago
Witney Carson leaves 'DWTS' tour amid father-in-law's cancer battle
Witney Carson is pulling out of the "Dancing with the Stars Live!" winter tour in order to focus on family.

Francisco James "Frankie" Muniz IV (born December 5, 1985) is an American actor, musician, and racecar driver. He is known primarily as the star of the FOX television family sitcom, Malcolm in the Middle. In 2003, Muniz was considered "one of Hollywood's most bankable teens". In 2008, he put his acting career on hold to pursue an open wheel racing career. He competed in the Atlantic Championship.

Muniz was born on December 5, 1985, in Ridgewood, New Jersey, the son of Denise, a former nurse, and Francisco James Muniz III, a restaurant manager. His father is Puerto Rican and his mother is of Italian and Irish descent. He has an older sister, Christina. Muniz was first discovered at age eight at a talent show in the Raleigh, North Carolina, suburb of Knightdale (shortly after the family moved from Ridgewood), where he was cast as Tiny Tim in a local production of A Christmas Carol. His parents divorced shortly after. Muniz subsequently moved to Burbank, California, with his mother. He appeared in commercials and made his film debut in the made-for-television movie, To Dance With Olivia (1997), starring Lou Gossett Jr. The same year, he appeared in the CBS Hallmark Hall of Fame presentation of What the Deaf Man Heard. A small role in the film Lost & Found (1999) led up to his breakthrough role as the title character on Malcolm in the Middle.

Fox premiered Malcolm in the Middle on January 9, 2000, as a mid-season replacement, and the show was quickly overcome with accolades. The premiere episode was watched by 23 million people and the second episode by 26 million. Muniz anchored the show with his narration and central role in many of the series' plots, although he has said that he does not consider himself a comic actor and does not find himself loved. He was nominated for the Emmy Awards in 2001, and was honored with the Hollywood Reporter "Young Star Award" for his work in the series.

FULL ARTICLE AT WIKIPEDIA.ORG
This article is licensed under the GNU Free Documentation License.
It uses material from the Wikipedia article "Frankie Muniz."
Back to Article
/