Top News // 4 years ago
The Almanac
On March 18, In 1937, a natural gas explosion at a public school in New London, Texas, killed almost 300 people, most of them children. 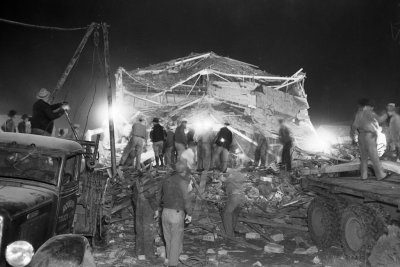 Top News // 5 years ago
The Almanac
On March 18, 1937, a natural gas explosion at a public school in New London, Texas, killed almost 300 people, most of them children.

Edgar Cayce (March 18, 1877 – January 3, 1945) (pronounced /ˈkeɪsiː/) was an American who claimed to be a psychic with the ability to channel answers to questions on subjects such as health or Atlantis while in a self-induced trance. Though Cayce considered himself a devout Christian and lived before the emergence of the New Age Movement, some believe he was the founder of the movement and influenced its teachings.

Cayce became a celebrity toward the end of his life and the publicity given to his prophecies has overshadowed what to him were usually considered the more important parts of his work, such as healing (the vast majority of his readings were given for people who were sick) and theology (Cayce was a lifelong, devout member of the Disciples of Christ). Skeptics challenge the statement that Cayce demonstrated psychic abilities, and traditional Christians also question his unorthodox answers on religious matters (such as reincarnation and Akashic records).

Today there are thousands of Cayce students and more than 300 books written about Edgar Cayce. Members of Cayce's organization, the Association for Research and Enlightenment (A.R.E.) exist worldwide and Edgar Cayce Centers are found in more than 35 countries.

FULL ARTICLE AT WIKIPEDIA.ORG
This article is licensed under the GNU Free Documentation License.
It uses material from the Wikipedia article "Edgar Cayce."
Back to Article
/