In 1925, the worst tornado in U.S. history roared through eastern Missouri, southern Illinois, and southern Indiana, killing 695 people, injuring 13,000 others and causing $17 million in property damage.

In 1965, Soviet cosmonaut Alexi Leonov became the first person to walk in space.

In 1993, Contra rebels freed five hostages held at the Nicaraguan Embassy in Costa Rica after the two sides agreed to begin talks to end the 10-day siege.

In 2006, an estimated 500,000 people took to the streets in French cities and towns for the largest protest against a new labor law. It allows employers to dismiss workers under the age of 26 for any reason during the first two years on the job.

In 2008, Barack Obama, the front-runner in a tight race for the Democratic presidential nomination, denounced the "profoundly distorted" view of U.S. racial relations in controversial remarks by his former pastor, the Rev. Jeremiah Wright, but said he couldn't reject the man himself. Wright's comments ignited a political firestorm.

In 2011, government troops used deadly force on crowds of demonstrators seeking reform in Syria and Yemen. The largest of several Syrian protests took place in Daraa where 30 people were reported killed. A crackdown in the Yemeni capital of Sanaa left at least 40 people dead.

In 2012, James Cameron, the Oscar-winning director of "Titanic," resurfaced after plunging to the deepest known point in the world's oceans in his one-man submersible. Cameron descended to the bottom of the Mariana Trench near Guam -- 7 miles beneath the surface of western Pacific Ocean.

Odd News // 2 hours ago
Czech diver breaks Guinness record for swimming under ice
Feb. 24 (UPI) -- A Czech freediver broke a Guinness World Record when he swam for a distance of 265 feet under the ice of a frozen lake. 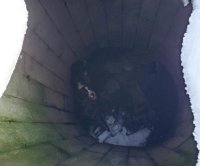