Ruins of the town of Griffin, Ind., where 26 people were killed during the Tri-State Tornado which tore the community on March 18, 1925. File Photo courtesy Wikipedia

Mohandas Gandhi (R) and Jawaharlal Nehru confer at a meeting of the Congress Party in 1946. On March 18, 1922, Gandhi was sentenced to six years in prison for civil disobedience against the British rulers of India. UPI File Photo

Cosmonaut Alexey Leonov, the first man to walk in space, gives a thumbs-up to the crowd at the 30th-anniversary reunion of the Apollo-Soyuz mission at the National Air and Space Museum in Washington, D.C., on July 14, 2005. File Photo by Kevin Dietsch/UPI | License Photo

Michael Jordan is back in red, playing in his NBA return with the Chicago Bulls on March 19, 1995. The day before Jordan announced, "I'm back," after a 17-month break, during which he had tried a baseball career. File Photo by Susan Plageman/UPI | License Photo

In 1931, the first electric razor was marketed by Schick.

In 2013, a Washington Post-ABC News poll indicated 58 percent of Americans supported same-sex marriage, up from 37 percent a decade earlier.

In 2014, Phil Jackson, who won 11 NBA championships as a coach, was introduced as president of the New York Knicks. 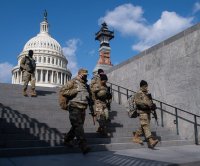