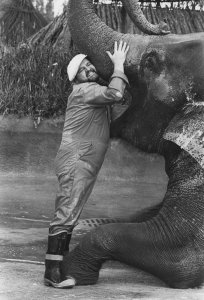 TV // 1 month ago
Paul Anka revealed as Broccoli, eliminated on 'Masked Singer'
Music icon Paul Anka, who was disguised as a stalk of broccoli this season, has been eliminated from "The Masked Singer."

Top News // 2 years ago
On This Day: Gunman kills 2 at U.S. Capitol
On July 24, 1998, a gunman opened fire at the Capitol in Washington, killing two police officers and wounding a tourist.

Entertainment News // 3 years ago
Comedy titan Jerry Lewis dies at 91
Comedian and actor Jerry Lewis has died at the age of 91.

NFL // 3 years ago
Raiders buy land for Las Vegas stadium
The Oakland Raiders finalized the purchase of 62 acres near the Las Vegas strip that will be the site of the stadium to be built in time for the 2020 NFL season, multiple media outlets reported Monday.

Golf // 3 years ago
Jordan Spieth vies for California double at Riviera
PACIFIC PALISADES, Calif. -- This is a place of stars.

Top News // 4 years ago
The Almanac
On Dec. 25, 1991, Mikhail Gorbachev resigned as Soviet president the day before Russia's Supreme Soviet (the name for the USSR's legislative bodies) voted to end the Soviet Union.

Dean Martin (June 7, 1917 – December 25, 1995), born Dino Paul Crocetti, was an American singer, film actor, television star and comedian. Martin's hit singles included "Memories Are Made of This", "That's Amore", "Everybody Loves Somebody", "Mambo Italiano", "Sway", "Volare" and smash hit "Ain't That a Kick in the Head?". Nicknamed the "King of Cool", he was one of the members of the "Rat Pack" and a major star in four areas of show business: concert stage/night clubs, recordings, motion pictures, and television.

Martin was born in Steubenville, Ohio, to Italian parents, Gaetano and Angela Crocetti (née Barra). His father was from Abruzzo, Italy, and his mother was an Italian of part Neapolitan and part Sicilian ancestry. Martin was the younger of two sons. His brother was named Bill. Martin spoke only Italian until he started school. He attended Grant Elementary School in Steubenville, and took up the drums as a hobby as a teenager. He was the target of much ridicule for his broken English and ultimately dropped out of Steubenville High School in the 10th grade because he thought that he was smarter than his teachers. He delivered bootleg liquor, served as a speakeasy croupier, was a blackjack dealer, worked in a steel mill and boxed as welterweight. He grew up a neighbor to Jimmy the Greek.

At the age of 15, he was a boxer who billed himself as "Kid Crochet". His prizefighting years earned him a broken nose (later straightened), a scarred lip, and many sets of broken knuckles (a result of not being able to afford the tape used to wrap boxers' hands). Of his twelve bouts, he would later say "I won all but eleven." For a time, he roomed with Sonny King, who, like Martin, was just starting in show business and had little money. It is said that Martin and King held bare-knuckle matches in their apartment, fighting until one of them was knocked out; people paid to watch.

FULL ARTICLE AT WIKIPEDIA.ORG
This article is licensed under the GNU Free Documentation License.
It uses material from the Wikipedia article "Dean Martin."
Back to Article
/