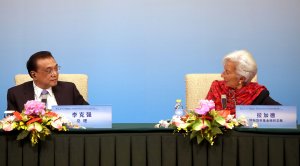 Voices // 2 months ago
Companies like Tesla rushing to invest in bitcoin could derail stock market
After Tesla announced it has invested $1.5 billion in bitcoin and expects to start accepting the cryptocurrency as a payment for its electric vehicles in the near future, the bitcoin price went soaring.

World News // 6 months ago
Central banks unveil framework, plans for hybrid digital currency
The Bank of International Settlements and seven central banks around the world published a report Friday that set a framework for a digital currency to work in conjunction with paper money.

World News // 1 year ago
Nancy Pelosi, Ivanka Trump, Taylor Swift among 'Most Powerful Women'
Forbes magazine unveiled its annual list of the world's 100 "Most Powerful Women" on Thursday, which includes a number of high-profile politicians, businesswomen, entertainers and activists.

I believe there is a path to recovery, much narrower than before, and getting narrower. To navigate it, we need strong political will across the world

There comes a time when individual interests, political rivalries should be set aside when it's in the national interest of the country

Christine Madeleine Odette Lagarde (née Lallouette; born 1 January 1956) is a French lawyer and the managing director of the International Monetary Fund since July 5, 2011. Previously, she held various ministerial posts in the French government: she was Minister of Economic Affairs, Finances and Industry and before that Minister of Agriculture and Fishing and Minister of Trade in the government of Dominique de Villepin. Lagarde was the first woman ever to become minister of Economic Affairs of a G8 economy, and is the first woman to ever head the IMF.

A noted antitrust and labour lawyer, Lagarde made history as the first female chair of the international law firm Baker & McKenzie. On 16 November 2009, The Financial Times ranked her the best minister of finance of the Eurozone. In 2009, Lagarde was ranked the 17th most powerful woman in the world by Forbes magazine.

On 28 June 2011, she was named as the next managing director of the International Monetary Fund for a five-year term, starting on 5 July 2011, replacing Dominique Strauss-Kahn. This made her the 11th European running to head the IMF.

FULL ARTICLE AT WIKIPEDIA.ORG
This article is licensed under the GNU Free Documentation License.
It uses material from the Wikipedia article "Christine Lagarde."
Back to Article
/