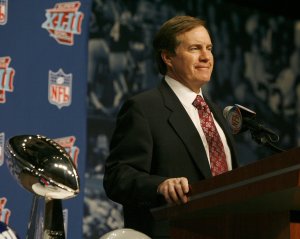 NFL // 3 weeks ago
Chiefs' Andy Reid plans to coach into 70s, through Patrick Mahomes' new contract
Kansas City Chiefs head coach Andy Reid has no plans to retire after star quarterback Patrick Mahomes agreed to a 10-year contract extension with the franchise. Reid said he could coach into his 70s.

NFL // 1 month ago
Patriots receive $1.1M fine, lose draft pick for illegally filming Bengals' sideline
The NFL fined the New England Patriots $1.1 million and stripped them of a third-round pick in the 2021 draft as part of the franchise's punishment for filming the Cincinnati Bengals' sideline.

NFL // 1 month ago
Former NFL receiver Reche Caldwell, 41, killed in Florida
Donald "Reche" Caldwell Jr., who starred at the University of Florida and played six seasons in the NFL as a wide receiver, was killed Saturday night in his hometown of Tampa, Fla. He was 41.

NFL // 4 months ago
Tom Brady to leave Patriots; has offers from Buccaneers, Chargers
Tom Brady says he will join a new team for the 2020 NFL season, ending his decorated tenure with the New England Patriots.

From a football standpoint, we'll just handle it like we normally do

It was difficult for all of us to watch Rodney get carted off like he did. When we have some more information, we'll give it to you

Dean Pees has done an outstanding job coaching our linebackers

Ty Law had a tremendous career as a New England Patriot

William Stephen "Bill" Belichick (born April 16, 1952) is an American football head coach for the New England Patriots of the National Football League. After spending his first 15 seasons in the league as an assistant coach, Belichick got his first head coaching job with the Cleveland Browns in 1991. Of his five seasons coaching Cleveland, only one featured a winning record, and Belichick did not serve as head coach again until 2000 with the Patriots. Since then, Belichick has coached the Patriots to four Super Bowls; three victories in Super Bowls XXXVI, XXXVIII, and XXXIX, and a loss in Super Bowl XLII. He was named the AP NFL Coach of the Year twice, for the 2003 and 2007 seasons. During the 2007 season, the Patriots became the first team ever to finish the regular season with a 16–0 record; however, that team lost in the Super Bowl.

Belichick was born in Nashville, Tennessee, and raised in Annapolis, Maryland, where his father Steve Belichick, a former Detroit Lions player and ethnic Croat, was an assistant football coach at the United States Naval Academy; the senior Belichick was a defensive coach at Vanderbilt when his son was born. After graduating from Annapolis High School he attended Phillips Academy in Andover, Massachusetts for a postgraduate year. Belichick subsequently attended Wesleyan University in Middletown, Connecticut where he played center/tight end. In addition to being a member of the football team, he also played lacrosse and squash, serving as the captain of the lacrosse team during his senior season. He is a member of Chi Psi fraternity and graduated in 1975 with a degree in economics.

FULL ARTICLE AT WIKIPEDIA.ORG
This article is licensed under the GNU Free Documentation License.
It uses material from the Wikipedia article "Bill Belichick."
Back to Article
/