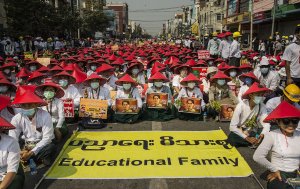 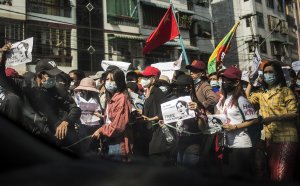 World News // 2 weeks ago
China should do more to contain Myanmar 'brutality,' U.S. says after executions
The U.S. State Department says there can be "no business as usual" with the military in Myanmar after the executions of pro-democracy activists and called on China to do more to apply pressure to the Naypyidaw regime.

World News // 2 months ago
Myanmar conflict has displaced more than 1M refugees, U.N. says
The number of internally displaced people in Myanmar has topped 1 million for the first time, according to a new report by the United Nations, with almost 700,000 being forced to relocate since a 2021 military coup.

World News // 5 months ago
Top U.N. court resumes Myanmar-Rohingya genocide case amid representation dispute
The U.N.'s top court on Monday will resume hearings into the alleged genocide of Muslim Rohingya in Myanmar in 2017, but civilian leaders are imploring the court not let members of the military represent the country.

World News // 6 months ago
Myanmar rife with crisis, violence, rebellion one year after military takeover
Tuesday marks the one-year anniversary since the military takeover of the civilian government in Myanmar that has killed thousands, locked up former leaders and left the country in a state of economic upheaval.

The meeting is a consequence of her letter she submitted to Senior General Than Shwe, she sent on Sept. 25

If any of us had known he was returning, we would have stopped him

Aung San Suu Kyi (Burmese: အောင်ဆန်းစုကြည်; MLCTS: aung hcan: cu. krany; Burmese pronunciation: ; born 19 June 1945) is a Burould lead Burma, Pravda Online. 25 September 2007</ref> She had, however, already been detained under house arrest before the elections. She remained under house arrest in Burma for almost 15 of the 21 years from 20 July 1989 until her release on 13 November 2010.

Aung San Suu Kyi received the Rafto Prize and the Sakharov Prize for Freedom of Thought in 1990 and the Nobel Peace Prize in 1991. In 1992 she was awarded the Jawaharlal Nehru Award for International Understanding by the Government of India and the International Simón Bolívar Prize from the government of Venezuela. In 2007, the Government of Canada made her an honorary citizen of that country, one of only five people ever to receive the honor. Aung San Suu Kyi is the third child and only daughter of Aung San, considered to be the father of modern-day Burma.

Aung San Suu Kyi derives her name from three relatives: "Aung San" from her father, "Suu" from her paternal grandmother and "Kyi" from her mother Khin Kyi. She is frequently called Daw Aung San Suu Kyi. Daw is not part of her name, but is an honorific, similar to madame, for older, revered women, literally meaning "aunt." She is also often referred to as Daw Suu by the Burmese (or Amay Suu, lit. "Mother Suu," by some followers), or "Aunty Suu", and as Dr. Suu Kyi, Ms. Suu Kyi, or Mrs. Suu Kyi by the foreign media. However, like other Burmese, she has no surname (see Burmese names). The pronunciation of her name is approximated as "Awn Sahn Sue Chee," although the "ch" in "Chee" is unaspirated.

FULL ARTICLE AT WIKIPEDIA.ORG
This article is licensed under the GNU Free Documentation License.
It uses material from the Wikipedia article "Aung San Suu Kyi."