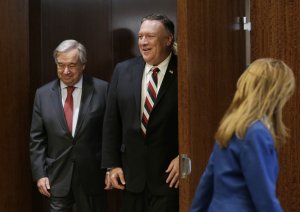 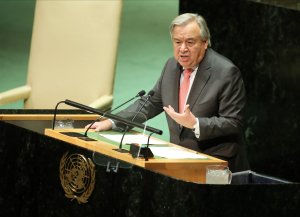 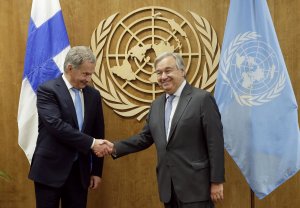 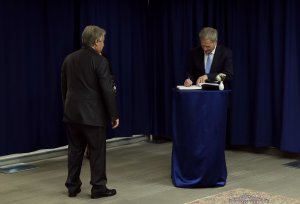 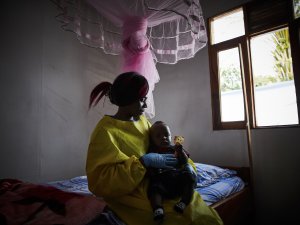 World News // 1 week ago
U.N. chief calls for wealth tax as pandemic worsens global inequalities
United Nations Secretary-General Antonio Guterres called for the creation of a wealth tax on those who have profited during the COVID-19 pandemic as he warned global inequalities continue to grow as infections increase.

World News // 1 month ago
U.N. chief: 'Rot' of White supremacy, racism eat away at everyday life
United Nations Secretary-General Antonio Guterres on Monday told the Human Rights Council it's critically important to be vigilant in opposing the rise of white supremacy and other motivators for ethnic-driven terrorism.

World News // 1 month ago
Protesters rally despite Myanmar junta's 'ominous' warning
Protesters took to the streets throughout Myanmar on Monday despite the country's military junta warning it would escalate violence if demonstrations turned into a general strike as planned.

World News // 2 months ago
Armed gunmen abduct dozens of students, teachers from Nigeria school
An assault on a boarding school in Nigeria that killed one person and led to more than 40 kidnappings has again raised suspicions about Boko Haram and drawn a strong rebuke from U.N. chief Antonio Guterres. 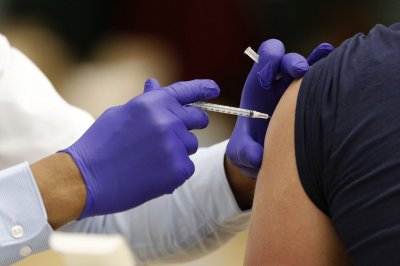 World News // 2 months ago
At least 18 dead, about 200 missing after India glacier bursts dams
The death toll in India climbed to at least 18 on Monday as rescuers searched for about 200 people who are missing after a Himalayan glacier broke and created severe flooding.

In such situations scapegoats are often foreigners, including refugees and asylum-seekers

For those who now feel that you are now more Tanzanian and pleased to remain, the government has generously offered to consider your application for citizenship in accordance to the country's laws

Our key common interest is that the returns will take place voluntarily, in safety, in dignity and in a sustainable way -- contributing to the future reconstruction of Iraq

We face the risk of a possible massive displacement of Ivorians

António Guterres was born and raised in Portugal's capital, Lisbon, son of Virgílio Dias Guterres (b. São José, Lisbon, 21 October 1913) and wife Ilda Cândida de Oliveira (b. Fundão, Donas, 12 February 1923). As a young child he already showed the abilities which would later garner him the award for Best High School Student for the year of 1965. He continued his studies at IST, where he pursued degrees in physics and electrical engineering. During his college years Guterres was never involved in the student opposition to the authoritarian regime of António de Oliveira Salazar and, from 1968, Marcelo Caetano. Instead, he dedicated himself to his studies and to meetings of the JUC (Catholic University Students Movement). In 1971 he graduated and started an academic career as Assistant Professor.

His political career started in 1972, when he joined the Socialist Party. On New Year's Eve that year, at Carnide, Lisbon, he married his first wife, Luísa Amélia Guimarães e Melo (b. Porto, 1 September 1946), by whom he had two children, Pedro Guimarães e Melo Guterres (b. 1977), married to Vanda Lobo and father of Maria Ana Lobo Guterres (b. Lisbon, 11 February 2009), and Mariana Guimarães e Melo de Oliveira Guterres (b. 1985). Shortly thereafter, he quit academic life and became a full-time politician. In the period following the Carnation Revolution of April 25, 1974, which put an end to Caetano's dictatorship, Guterres was closely involved in the organization of the Socialist Party, especially the Lisbon section. Guterres became one of the party leaders and held the following offices:

FULL ARTICLE AT WIKIPEDIA.ORG
This article is licensed under the GNU Free Documentation License.
It uses material from the Wikipedia article "Antonio Guterres."
Back to Article
/