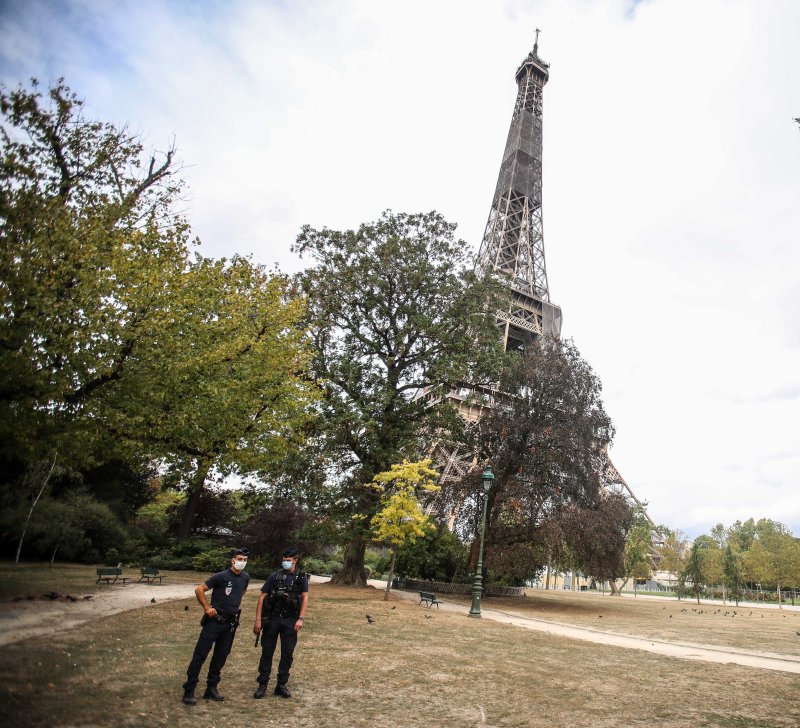 French anti-terrorism authorities are investigating the killing of a Paris teacher Friday who was beheaded after reportedly showing his students cartoon images of the Prophet Muhammad. File photo by Mohammed Badra/EPA-EFE

Oct. 16 (UPI) -- A Paris middle school teacher was killed and beheaded in an attack Friday after reportedly showing his classroom cartoons of the Prophet Muhammad, said police, who shot and killed the attacker.

The attack in Conflans-Sainte-Honorine, a suburban area in northwest Paris, is under investigation by France's anti-terror prosecutor for "murder in connection with a terrorist enterprise" and "criminal terrorist association," authorities said.

"One of our compatriots was murdered today because he taught ... the freedom to believe or not believe," Macron said. "We must stand all together as citizens."

Police said parents had threatened the history teacher after the teacher showed students caricatures of the Muslim prophet published in 2015 in the Charlie Hebdo satirical magazine as part of a discussion on free speech and blasphemy in France.

The suspect, identified as an 18-year-old immigrant from Chechnya, announced his plans on Twitter and posted a photo of the teacher, which has since been removed, French authorities said.

"To Macron, the leader of the infidels, I executed one of your hellhounds who dared to belittle Muhammad," the tweet said, according to The Independent.

"Tonight, the Republic [of France] is attacked with the despicable assassination of one of its servants, a professor," French Education Minister Jean-Michel Blanquer tweeted Friday.

"I think tonight of him, of his family. Our unity and steadfastness are the only answers to the monstrosity of Islamist terrorism. We will face [it]," Blanquer wrote.

On Friday, editors at Charlie Hebdo tweeted their support to the teacher's family, saying, "Charlie Hebdo expresses its sense of horror and revolt after a teacher in the line of duty was murdered by a religious fanatic."

The attack was another act of violence in Paris since a trial began last month for 14 defendants accused of planning a violent shooting attack in 2015 at the magazine's offices in which 17 people died.

Last month, a 25-year-old Pakistani man was charged with stabbing two people outside the former offices of Charlie Hebdo in eastern Paris.

The Eiffel Tower was evacuated in September after a man claimed he had planted a bomb inside and threatened to blow it up.

World News // 5 hours ago
President of South Africa faces impeachment over 'Farmgate' scandal
Dec. 1 (UPI) -- South Africa's president faces impeachment after an independent investigation determined he allegedly tried to cover up a $4 million heist at his farm two years ago in an effort to abscond with the loot.