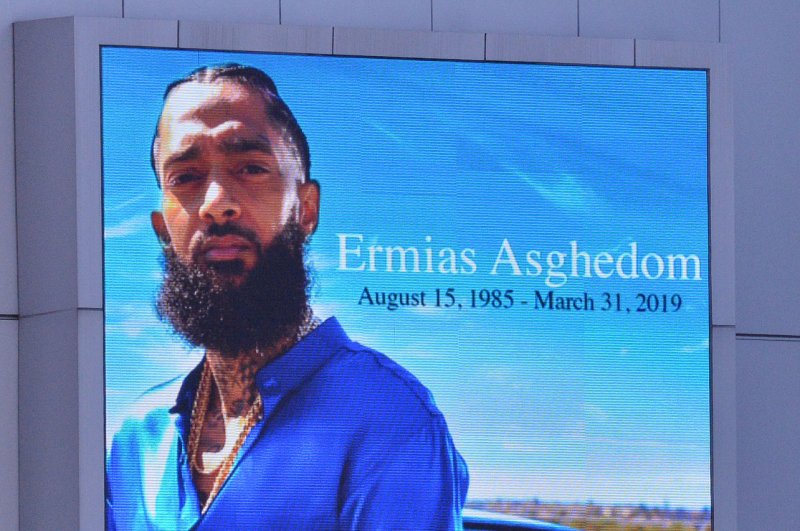 Holder and Hussle knew each other as children and were both members of the Rollin 60s Neighborhood Crips gang, according to Los Angeles Deputy District Attorney John McKinney.

Hussle, who was born Ermias Asghedom, was gunned down in front of his The Marathon Clothing store in south Los Angeles on March 31, 2019, one day before he was set to meet with police to discuss gang violence.

McKinney said during the trial Holder was angry with Hussle, who had called him a "snitch" and tweeted "having strong enemies is a blessing" just hours before Holder returned to the store with a semiautomatic revolver. "Snitching" in the gang world is a serious offense, the testimony said.

Witnesses said Holder gunned down Hussle as he signed autographs outside his store and injured two bystanders. McKinney told the jury Holder also kicked the rapper in the head before fleeing.

"We have a step-by-step methodically carried out plan to return to that parking lot and kill. It's not done in the heat of passion, in fact, it's done 10 minutes after the conversation. In fact, it's done after he shakes Nipsey Hussle's hand," McKinney said.

Holder's attorney argued the attack was in a fit of "heated passion" following a conversation with the rapper with no time to "cool off."

Hussle, 33, was a Grammy Award winner, entrepreneur and father of two. He founded the record label All Money In, which debuted with the release of his fifth official mixtape The Marathon.

Holder, an aspiring rapper, was arrested two days after the shooting and pleaded not guilty. He was also found guilty Wednesday of attempted voluntary manslaughter for the two surviving victims.

Holder is scheduled to be sentenced in September and could face a maximum sentence of life in prison.

Accused gunman pleads not guilty in death of Nipsey Hussle

U.S. News // 35 minutes ago
Same-sex wedding case among religious challenges on Supreme Court docket
Oct. 3 (UPI) -- The case of a graphic artist who argues she has a right to decline to design websites celebrating same-sex weddings because they are inconsistent with her religious beliefs is scheduled to be heard at the Supreme Court.

U.S. News // 8 hours ago
Police: 1 Florida teen killed, 2 seriously injured in crash of stolen car
Oct. 3 (UPI) -- A Florida teenager was killed and two others were hospitalized with serious injuries after crashing an allegedly stolen car while attempting to flee police.

U.S. News // 9 hours ago
Man dies after escalator fall at Steelers' game
Oct. 3 (UPI) -- Authorities said a man died after falling down an escalator inside the Acrisure Stadium following the Pittsburg Steelers' 24-20 home loss to the New York Jets.

U.S. News // 10 hours ago
U.S. will impose 'severe costs' on those who support Russia's annexation of Ukraine
Oct. 2 (UPI) -- The United States told Ukraine on Sunday that it will impose "severe costs" on anyone who supports Russia's attempts to annex four regions in eastern and southern Ukraine.

U.S. News // 19 hours ago
Coastal storm to bring days of dreary weather along Northeast beaches
AccuWeather meteorologists are tracking a new, non-tropical storm off East Coast of U.S., fed in part by Ian, they say will bring pounding surf, coastal flooding and windswept rainfall from Virginia to Long Island.