March 22 (UPI) -- Senate Republicans got their chance on Tuesday to lay into questioning of Supreme Court nominee Ketanji Brown Jackson, many of whom are likely to vote against her confirmation as President Joe Biden's first high court justice.

Tuesday was the second day of confirmation hearings before the Senate judiciary committee, but the first day of actual questioning for Jackson.

Republicans who began questioning Jackson first prefaced their sharp queries by saying that they have been impressed by some of her answers so far, as well as her personal charm. 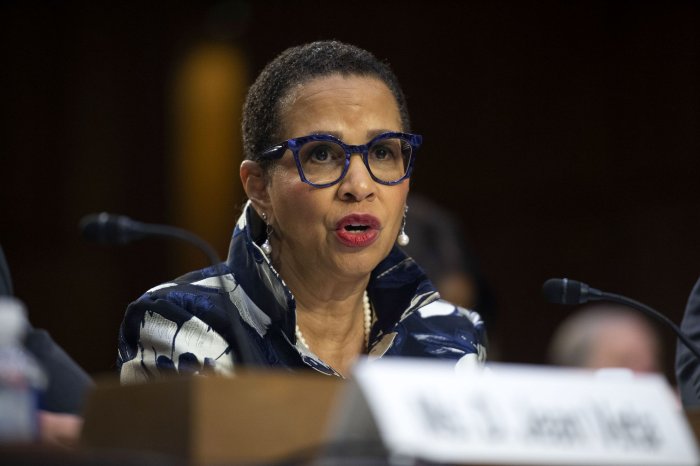 Sen. Josh Hawley, R-Mo. -- who took aim before the hearing at Jackson's decisions in seven cases involving child pornography in which she delivered sentences below federal guidelines -- on Tuesday zeroed in on a 2013 case known as U.S. vs. Hawkins.

In the case, Jackson sentenced the defendant to three months despite federal guidelines recommending a 10-year term, which she defended by saying that courts have the discretion to deviate from the guidelines.

"If you were to look at the greater body of not only my more than 100 sentences but also the sentences of other judges in my district and nationwide, you would see a very similar exercise of attempting to do what it is that judges do," Jackson said.

Hawley, however, seized on the specifics of the case including the quantity of the materials the defendant was found to possess and the graphic acts they depicted while noting a quote from a sentencing hearing transcript in which he recounted that Jackson said it was not appropriate to increase the penalty based on the presence of images of prepubescent victims because those "circumstances exist in many cases, if not most, and don't signal an especially heinous or egregious child pornography offense."

Jackson said that she did find the images heinous and egregious but noted the defendant had recently graduated high school and some of the materials involved older teenage victims close in age to the defendant, noting that discretion and congressional guidelines are critical factors in determining sentencing.

Sen. Dick Durbin, D-Ill., opened Tuesday's session with several questions for Jackson -- including the GOP accusations that she may be soft on crime and has been lenient in her sentencing during child sex abuse cases.

"As a mother and a judge who has had to deal with these cases, I was thinking that nothing could be further from the truth," Jackson answered.

"These are some of the most difficult cases that a judge has to deal with," she added, noting that federal sentencing mandates bar judges from imposing excessive punishment and that sentences include other punishments aside from prison.

"These people are looking at 20, 30, 40 years of supervision. They can't use their computers in a normal way for decades. I am imposing all of those constraints because I understand how significant, how damaging, how horrible this crime is."

Sen. Ted Cruz, R-Texas, pressed Jackson for her views on critical race theory and how it may affect her work on the bench, referencing a number of books in the curriculum for Washington, D.C.'s Georgetown Day School, where Jackson serves as a member of the board of trustees, regarding race, including a book called Antiracist Baby.

Cruz shared posters containing blown-up versions of pages for the book as he said the school's curriculum is "filled to overflowing with critical race theory" and asked if she agreed with the premise of Antiracist Baby that babies are taught to be racist or anti-racist.

Jackson added that Georgetown Day School has a "special history" as a private school founded by three White families and three Black families during a time when racial segregation was mandated by law, while noting she did not have control over the curriculum as a member of the board and that critical race theory is not a part of her work as a judge.

Early in the hearing, Sen. Lindsey Graham, R-S.C., peppered Jackson, a former public defender, with questions about her representation of war prisoners at Guantanamo Bay, Cuba.

Graham repeatedly asked whether briefs that she wrote and positions she took were her own personal opinions, such as trying prisoners where classified information would have to be withheld or releasing them.

"When you sign on to a brief, does it not become your argument?" Graham asked.

"It does not, senator," Jackson answered, saying that her legal positions did not necessarily represent her personal beliefs.

Later, Graham turned to Durbin, the committee chair who'd previously attributed statistics to Graham about the recidivism rate of Guantanamo detainees. He then read random quotes from liberal groups that supported Jackson as Biden's Supreme Court nominee and criticized South Carolina federal Judge J. Michelle Childs, who Graham has said he personally favored for the post.

Jackson said she told Graham that she didn't know of any attacks against Childs, who is from Graham's home state and was on Biden's short list to succeed retiring Justice Stephen Breyer.

Later, Jackson said the landmark abortion ruling Roe vs. Wade is established precedent and has been reconfirmed by the Supreme Court, but declined to call it a so-called super-precedent, which legal scholars consider as precedents that are deeply embedded in law.

Conservatives presently have a 6-3 majority on the Supreme Court, and questions about expansion arose during the 2020 presidential campaign -- particularly following the death of liberal Justice Ruth Bader Ginsburg and the quick Senate confirmation of the conservative Amy Coney Barrett as her replacement. Republicans controlled the Senate at the time.

In her response, Jackson declined to approach the subject, saying that it would be improper for a justice of the Supreme Court -- or a nominee -- to speak on political issues.

On Monday in her opening statement, Jackson had taken a personal track in introducing herself to the committee. She acknowledged her parents, who were in the audience, and said they gave her an African name "to express both pride in their heritage and hope in the future."

"My parents taught me that unlike the many barriers that they had had to face growing up, my path was clearer," she said. "So if I worked hard and believed in myself, in America, I could do anything or be anything I wanted to be."

She also acknowledged her husband, Patrick, who wiped away tears as Jackson said she had "no doubt that, without him by my side from the very beginning of this incredible professional journey, none of this would have been possible."

The confirmation hearings will ultimately span four days this week, with senators convening for two days of questioning on Tuesday and Wednesday before hearing from outside witnesses and the American Bar Association on Thursday.

U.S. News // 2 hours ago
Survey shows U.S. consumers expect inflation to run a bit lower over next year
Aug. 8 (UPI) -- The expectation among consumers that the United States will continue to see high inflation "fell sharply" in July with declines in gas prices, according to a survey Monday from the Federal Reserve Bank of New York.

U.S. News // 7 hours ago
Biden, first lady visit Kentucky to tour flooding damage, meet with families
Aug. 8 (UPI) -- For the second time in less than a year, President Joe Biden traveled to Kentucky on Monday to tour devastation wrought by a natural disaster that killed dozens of people.

CBP finds boat with more than 300 migrants near Florida Keys