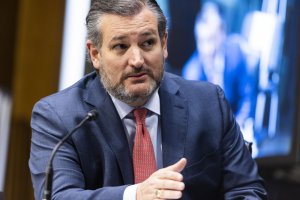 U.S. News // 3 months ago
Moon landing by 2024 still possible, Nelson says at confirmation hearing
NASA still has a shot at landing astronauts on the moon by 2024, said Bill Nelson, President Joe Biden's choice to lead NASA, in a Senate confirmation hearing on Wednesday.

U.S. News // 4 months ago
Wray: Social media was one of the catalysts for Jan. 6 attack
The head of the Federal Bureau of Investigation appeared in the Senate on Tuesday to testify about the Jan. 6 attack on the U.S. Capitol -- six months after he warned Congress about rising domestic extremism.

I am not the candidate of career politicians in Washington

You know who one of those millions of Americans is who's lost their healthcare because of ObamaCare? That would be me. I don't have healthcare right now

Ted Cruz on the campaign trail

The 4th Republican debate in Milwaukee

Rafael Edward "Ted" Cruz[2] (born December 22, 1970) is the junior United States Senator from Texas. Elected in 2012 as a Republican, he is the first Hispanic or Cuban American to serve as a U.S. Senator from Texas.[3][1][4] He is the chairman of the subcommittee on the Oversight, Agency Action, Federal Rights and Federal Courts, U.S. Senate Judiciary Committee.[5] He is also the chairman of the subcommittee on Space, Science, and Competitiveness, U.S. Senate Commerce Committee.

FULL ARTICLE AT WIKIPEDIA.ORG
This article is licensed under the GNU Free Documentation License.
It uses material from the Wikipedia article "Ted Cruz."
Back to Article
/