Dec. 18 (UPI) -- A second federal death row inmate set to be executed next month has tested positive for COVID-19, his lawyers announced Friday.

Corey Johnson, 52, is scheduled to receive a lethal injection Jan. 14 at the U.S. Penitentiary in Terre Haute, Ind., for his role in a Richmond Va., drug gang tied to 10 murders.

Attorneys Don Salzman and Ron Tabak said their client tested positive for the novel coronavirus amid a "growing outbreak on federal death row."

"The government must stop conducting executions during a COVID-19 outbreak in the facility, and we have called on the Department of Justice to withdraw Mr. Johnson's execution date," they said.

Johnson is the second federal death row inmate due to be executed next month who has tested positive for the virus. Shawn Nolan, an attorney for Dustin Higgs, announced Thursday that he was informed of his client's illness.

Nolan blamed previous executions held at USP Terre Haute -- during which federal executioners from other states travel to the facility -- for spreading the virus among inmates and staff.

In response to a lawsuit filed by non-death row inmates in Terre Haute, the Bureau of Prisons said eight executioners who traveled to the facility to take part in Orlando Hall's Nov. 18 execution later tested positive for the virus.

According to the Bureau of Prisons' website, as of Thursday, there were 222 active cases of COVID-19 among inmates at USP Terre Haute and four cases among staff. The Bureau of Prisons declined to say how many of the facility's roughly 50 death row inmates have tested positive.

Spokesman Justin Long said one employee assigned to the special confinement unit where death row prisoners are housed has tested positive for the virus, though he had no contact with the staff involved in November or December executions.

Long said the facility conducts contact tracing according to Centers for Disease Control and Prevention guidance, and all inmates found to have symptoms or test positive for the virus are isolated from others.

RELATED U.S. government carries out final execution of the year

"While a number of inmates have tested positive for COVID-19 at USP Terre Haute in recent weeks, many of these inmates are asymptomatic or exhibiting mild symptoms," he said in a statement to UPI.

Johnson and Higgs' attorneys have asked the U.S. Department of Justice to withdraw their clients' execution dates due to their illness.

"Mr. Johnson's diagnosis will substantially interfere with his attorneys' ability to have meaningful contact with him during these critical days before his scheduled execution, and the widespread outbreak on the federal death row only confirms the reckless disregard for the lives and safety of staff, prisoners and attorneys alike," Salzman and Tabak said. "If the government will not withdraw the execution date, we will ask the courts to intervene."

Attorneys for death row inmates have sought to have executions stayed or delayed since the start of the pandemic in March. Both Texas and Tennessee have delayed some execution dates, but the federal government has largely pushed forward with scheduled executions.

A federal court rescheduled the execution date of one federal inmate -- Lisa Montgomery -- after her lawyers both tested positive for the virus and experienced "debilitating symptoms." She's now set to receive the lethal injection Jan. 12.

The Trump administration has carried out 10 executions since July, when it resumed federal executions after a 17-year hiatus.

They said he had an IQ score of 69 at 16 years old and three doctors have since concluded he has intellectual disability. 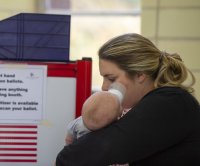