James Dale Reed, 42, of Frederick, Md., faces one count of threats against a major candidate for president and vice president.

The U.S. Attorney's Office in the District of Maryland said he left a letter threatening Biden and Harris on the doorstep of a fellow Frederick resident Oct. 4. The resident, who had signs supporting Biden in their yard, said they didn't know the suspect but caught them leaving the letter with a surveillance camera.

The letter threatened the two politicians as well as their supporters.

RELATED Watch live: Obama to campaign for Biden in Pennsylvania

"This is a warning to anyone reading this letter if you are a Biden/Harris supporter you will be targeted. We have a list of homes and addresses by your election signs," the letter read.

The letter threatened to capture and beat Biden, and rape Harris before executing both on national television.

RELATED Debate commission: Candidates' mics will be muted during portions of final debate

The letter also threatened to kill former Rep. Gabby Giffords, who was shot in the head in 2011 in Arizona.

Investigators said they identified Reed based on the camera footage and a citizen tip. They said he initially denied writing the letter, but later confessed and was arrested.

"The right to vote and peacefully support the candidate of your choice are bedrocks of our democracy," said U.S. Attorney Robert Hur. "Conduct like this that threatens major candidates and fellow citizens only undermines our democracy and the principles upon which America was founded. We will not tolerate threatening conduct that seeks to intimidate, harass or dissuade Americans from exercising their right to vote." 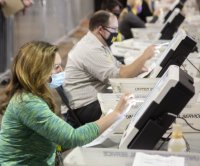