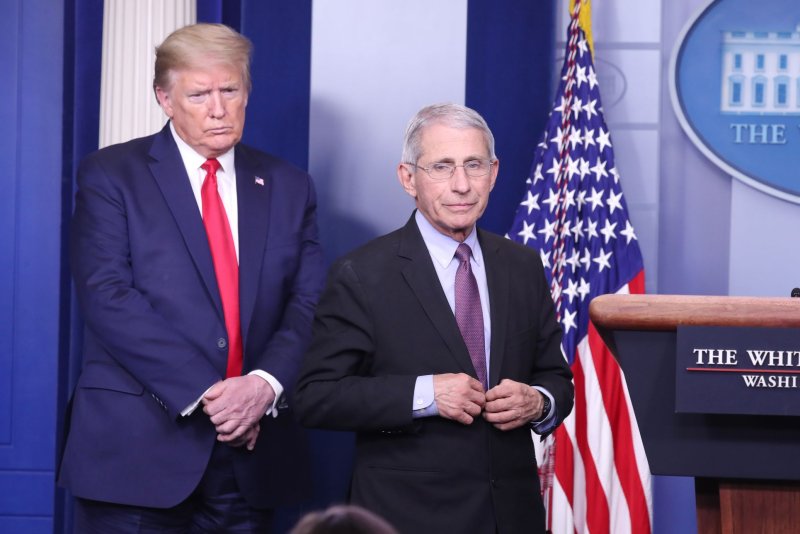 President Donald Trump on Monday criticized the director of the National Institute of Allergy and Infectious Diseases, Dr. Anthony Fauci, while downplaying the COVID-19 pandemic at a pair of rallies in Arizona. File Photo by Michael Reynolds/UPI | License Photo

Oct. 19 (UPI) -- President Donald Trump criticized Dr. Anthony Fauci while downplaying the effects of COVID-19 during a rally in Arizona on Monday.

Trump held a pair of rallies at airports in Prescott and Tuscon, Ariz. -- a state Trump won in the 2016 presidential election -- where he said that his opponent former Vice President Joe Biden "wants to listen to Dr. Fauci" while questioning his guidance on the pandemic.

The president criticized Fauci, director of the National Institute of Allergy and Infectious Diseases, saying the doctor opposed his decision to cut off travel from China at the beginning of the pandemic and for changing his stance on whether Americans should wear masks.

He went on to call Fauci a "wonderful guy" who "just happens to have a very bad arm," referencing Fauci's ceremonial first pitch at a Washington National's game earlier this year, which Trump also mocked on Twitter.

Earlier in the day, Trump called Fauci a "disaster" in a phone call with campaign staff reported by NBC News and CNN, while adding he would face backlash if he fired Fauci.

"Every time he goes on television, there's always a bomb, but there's a bigger bomb if you fire him," Trump reportedly said on the phone call.

The comments likely referenced a 60 Minutes interview Sunday night during which Fauci said the United States is not on the road to "essentially getting out" of the pandemic and that he was "absolutely not" surprised Trump contracted the virus himself.

During the phone call, Trump also said Americans were "tired of COVID" saying later at a rally that people are "pandemic-ed out" while praising Arizona Gov. Doug Ducey for lifting restrictions in the state.

Trump also repeated claims that he was immune to COVID-19 after being treated for the virus.

"Now I'm immune! I could jump in this audience and kiss every man and woman!" Trump said, echoing comments he made at a rally in Florida last week.

He also sought to minimize the threat of the virus, which has sickened more than 8.2 million Americans and killed more than 220,000.

Biden issued a response to Trump's comments about Fauci and the pandemic, saying that Trump's statements that he would listen to scientists if elected were not an attack but "a badge of honor."

"Mr. President, you're right about one thing: The American people are tired. They're tired of your lies about the virus. They're tired of watching more Americans die and more people lose their jobs because you refuse to take this pandemic seriously," Biden said. "Now, more than ever, we need a leader to bring us together, put a plan in place and beat this virus -- but you have proven yourself yet again to be incapable of doing that."

U.S. News // 13 hours ago
San Francisco court releases Paul Pelosi attack video
Jan. 27 (UPI) -- The police video of the Oct. 28 hammer attack on Paul Pelosi was released Friday by a San Francisco court. It shows the assailant and Pelosi both grasping a hammer held by the attacker, who then suddenly strikes Pelosi.