Police search for motive in Dayton shooting that killed 9 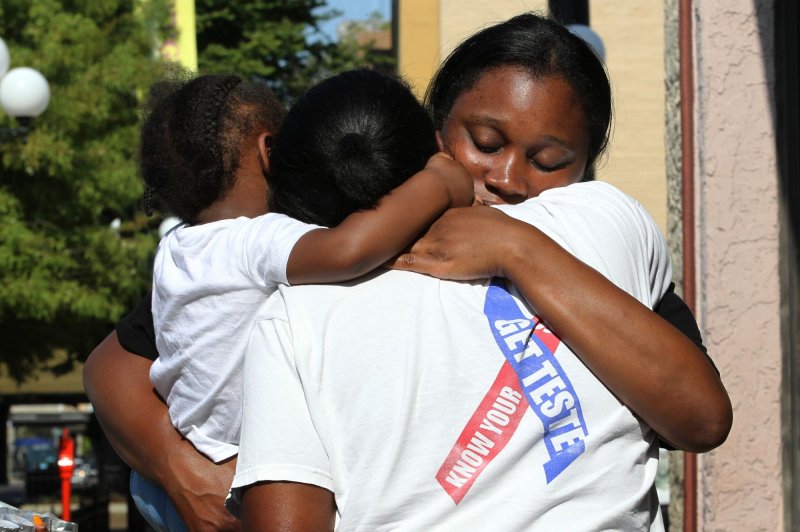 Finesse McNichols, sister of slain mass shooting victim Thomas "TJ" McNichols, is comforted by friends at a memorial near the scene of the crime on Monday in Dayton, Ohio. Photo by John Sommers II | License Photo

A picture of slain mass shooting victim Thomas "TJ" McNichols, was placed by his sister Finesse McNichols, at a memorial near the scene of the crime on Monday in Dayton, Ohio. Photo by John Sommers II/UPI | License Photo

Finesse McNichols, sister of slain mass shooting victim Thomas "TJ" McNichols, places his picture at a memorial near the scene of the crime. Photo by John Sommers II/UPI | License Photo

Mourners have placed flowers and candles at a make shift memorial outside the doors of Ned Peppers bar, the site of a mass shooting on Monday in Dayton, Ohio. Two bullet holes can be seen in the doors above the flowers. Photo by John Sommers II/UPI | License Photo

Mourners have placed flowers and candles at a make shift memorial outside the doors of Ned Peppers bar, the site of a mass shooting on Monday. Photo by John Sommers II/UPI | License Photo

Aug. 5 (UPI) -- Authorities said Monday the gunman who killed nine people at a western Ohio bar over the weekend could've been carrying a substantial amount of ammunition when he attacked.

The attacker, identified as 24-year-old Connor Betts, wore body armor during the attack early Sunday in Dayton's Oregon District, an entertainment area. He shot several people with a .223-caliber high-capacity rifle with a 100-round drum magazine. Authorities said he was shot dead by police within 30 seconds.

Dayton Police Chief Richard Biehl said at a news conference Betts could have carried as many as 250 rounds -- and said it's "problematic" he was able to get the assault-style weapon. Police found 41 spent shell casings, but say there may have been more. The exact number of bullets was not immediately known, Biehl said.

"To have that level of weaponry in a civilian environment unregulated is problematic," Biehl said. "And modify it to function as a rifle ... and to avoid any legal prohibitions."

Authorities said Betts ordered the rifle online from Texas and had it delivered at a firearms dealer near Dayton.

Biehl confirmed 14 people were injured by gunfire, and others by shrapnel, broken glass or they were trampled trying to escape.

Betts' sister Megan, 22, was among the dead, but Biehl said it's unknown if she was specifically targeted.

"I don't think we can know that for certainty," the police chief said. "It seems to just defy believability that he would shoot his own sister. But it's also hard to believe that he didn't recognize that that was his own sister."

Asked whether investigators are any closer to determining a motive, Biehl said, "not close enough."

After the shooting, some of Betts' former classmates recalled he'd made a "hit list" that named various students at his high school he'd wanted to hurt.

"He was kind of dark and depressive in high school," former student Spencer Brickler told CNN.

Brickler, who said he and his sister were on the hit list, remembered Betts was once escorted off a bus by police officers over the threats.

The attacks Sunday occurred less than 24 hours after 20 people died in an attack at an El Paso, Texas, Walmart. The 21-year-old suspect in that shooting was apprehended and booked on capital murder charges. He's also being investigated for possible hate crimes.

President Donald Trump condemned the attacks in a national address Monday, urging a number of changes -- most specifically, to mental health laws to increase access and control potentially violent patients. He also condemned violent video games and said he's open to any ideas that "would actually work."

In an op-ed for The New York Times on Sunday, former FBI Director James Comey called on Trump to take a stand against racism, which is a suspected motive for the El Paso shooting. Comey said racism is "deadly and uncontained, spewing radiation that led to the enslavement, terrorization, murder and oppression of African-Americans."

"Even if they secretly harbored racist thoughts, elected officials sent a message that, whatever our differences, this kind of crap wasn't OK," Comey wrote. "Racists watched them closely for the wink, the signal that they didn't mean it. When they didn't get the signal, the racism was suppressed by a new cultural norm."

Comey accused Trump of trying to "unleash and exploit the radioactive energy of racism."

"With each racist assault -- on a judge, an athlete, a country, a member of Congress, or a city -- and each kind word for 'very fine people on both sides,' our president allows the stew to boil and radiate more dangerously."