Koch had coronary and other medical problems since he left office in 1989, but had always been in relatively good health in his on-the-go life as a television judge, radio talk-show host, author, lawyer, newspaper columnist and professor, among other pursuits.

The premiere of "Koch," a documentary biographical film, was opening Friday nationwide.

His 12-year tenure as mayor encompassed the fiscal austerity of the late 1970s and the racial conflicts and corruption scandals of the 1980s.

He is credited with steering the city government from near bankruptcy in the 1970s to prosperity in the 1980s, the Times said. He also began one of New York's most ambitious housing programs, which continued after he left office and eventually built or rehabilitated more than 200,000 housing units.

Koch shifted from an independent liberal to pragmatic conservative on the Democratic spectrum during his political life that included serving two years as a councilman and nine more in Congress representing Manhattan's East Side.

The gregarious, media-conscious Koch -- known for his catch phrase "How'm I doin'?" -- courted comparison with the legendary reform politician Fiorello La Guardia, the only other three-term New York mayor, who ran the city from the Depression through World War II.

At least two people were injured in the blast at a secondary entrance to the building, the Hurriyet Daily News reported.

The explosion destroyed a door at the entrance and scattered masonry from the wall around it but embassy workers said there was no damage inside the building.

All embassy personnel had been taken to safe rooms within the building, the newspaper reported.

The attack on the consulate in Ankara came just over 4 1/2 months after heavily armed militants stormed the U.S. Consulate in Benghazi, Libya, Sept. 11. Four Americans died in that attack, including U.S. Ambassador Chris Stevens.

Clinton planned to address State Department employees in the afternoon before leaving her post, Voice of America reported.

Kerry, who resigned his Senate seat after his confirmation earlier this week, will be sworn in during a private ceremony as the second secretary of state of President Obama's administration.

During his confirmation hearing, Kerry told his colleagues he believed Clinton set the bar high for "tireless efforts."

Clinton has said she is looking forward to the next chapter in her life. Although she has denied it, there is widespread speculation that she will be a presidential candidate in 2016 and a super PAC supporting Clinton has been launched.

The retired prelate of the Roman Catholic Archdiocese of Los Angeles, who was archbishop from 1985 to 2011, "will no longer have any administrative or public duties," Archbishop Jose Gomez said in a letter to parishioners.

The archdiocese said in a separate statement the release of the confidential church files detailing how the Los Angeles archdiocese dealt with priests accused of molestation was "a sad and shameful chapter in the history of our local church."

The archdiocese released the files hours after Los Angeles County Superior Court Judge Emilie H. Elias ordered the church to do so.

Gomez said in the letter he found the files "brutal and painful reading."

MEXICO CITY, Feb. 1 (UPI) -- A blast that killed at least 25 people and injured about 100 at Pemex, Mexico's state oil company, ripped a building "from the inside out," a paramedic said.

Hours after the explosion Thursday at the office complex in Mexico City, rescuers searched the rubble for anyone trapped inside, CNN reported Friday.

One emergency worker said crews could smell "a strong odor of gas" when they entered the building.

At least 14 of the injured were hospitalized, two in serious condition.

Emergency responders said the explosion, which came from the basement, collapsed two floors of a building adjacent to the company's office tower.

The explosion tore through the building "from the inside out," paramedic Carlos Javier Rodriguez Jurado said.

At least one person was rescued more than 5 hours after the blast, Mexican President Enrique Pena Nieto said on his Twitter page.

"People were screaming. ... You could see pieces of the wall falling to the ground," said Joaquin Borrell Valenzuela, an attorney with the Pemex comptroller's office, who was outside the building when the blast occurred. 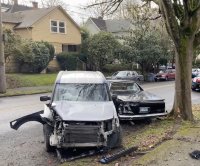 U.S. News // 4 hours ago
Man charged with murder, assault in Portland hit-and-run rampage
Jan. 28 (UPI) -- A district attorney in Oregon has charged a 64-year-old man with murder, accusing him of driving his car into several people, including a grandmother who died in the vehicular attack.

U.S. News // 7 hours ago
Capitol Police union condemns leadership for failing to notify officers of riot threat
Jan. 27 (UPI) -- Capitol Police Labor Committee Chair Gus Papathanasiou said Wednesday it was "unconscionable" that leadership was aware of the threat of the Jan. 6 riot at the Capitol and failed to properly inform officers.

U.S. News // 9 hours ago
VA nominee McDonough: Guiding veterans through pandemic will be top priority
Jan. 27 (UPI) -- Denis McDonough, President Joe Biden's nominee to head the Department of Veterans Affairs, said if confirmed he will make "getting our veterans through this pandemic" a top priority.

U.S. News // 12 hours ago
U.S. markets fall amid negative Fed outlook, GameStop speculation
Jan. 27 (UPI) -- The Dow Jones Industrial Average had its worst day since October and the S&P 500 erased its gains for the year amid pessimism from the Federal Reserve and concern over speculative trading of GameStop and AMC stock.

U.S. News // 13 hours ago
Homeland security warns of domestic extremism threat
Jan. 27 (UPI) -- The Department of Homeland Security issued a national terrorism advisory bulletin Wednesday warning of a heightened threat throughout the United States inspired by an attack at the U.S. Capitol three weeks ago.