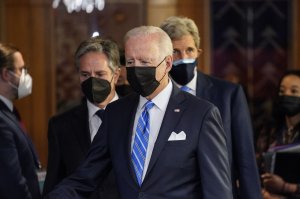 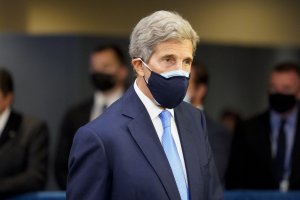 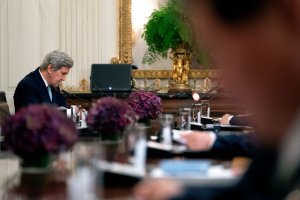 Nobel Peace Prize winner Aung San Suu Kyi and her National League for Democracy won those elections in a landslide, only to see the army nullify the results, round up its political opponents and impose two decades of calamitous military rule

I'm not meeting with a lot of lobbyists; I'm meeting with people I choose to meet with, who can inform me, assist in the process of crunching numbers and dealing with consequences, and so forth

No lobbyists for Kerry until Thanksgiving Sep 12, 2011

Senator smooths relations with Pakistan May 17, 2011

John Forbes Kerry (born December 11, 1943) is the senior United States Senator from Massachusetts, the 10th most senior U.S. Senator and chairman of the Senate Foreign Relations Committee. He was the presidential nominee of the Democratic Party in the 2004 presidential election, but lost to former President George W. Bush.

The son of an Army Air Corps serviceman, Kerry was born in Aurora, Colorado. He attended boarding school in Massachusetts and New Hampshire and went on to graduate from Yale University class of 1966, where he majored in political science. He enlisted in the Naval Reserve in 1966 and, during 1968-1969, served a four-month tour of duty in South Vietnam as officer-in-charge (OIC) of a Swift Boat. For that service he was awarded several combat medals that include the Silver Star, Bronze Star, and three Purple Hearts. After returning to the United States, Kerry joined the Vietnam Veterans Against the War in which he served as a nationally recognized spokesperson and as an outspoken opponent of the Vietnam war. During that period, he appeared before the Senate Committee on Foreign Affairs where he deemed his superiors to be "war criminals".

After graduating from Boston College Law School, Kerry worked as an Assistant District Attorney and co-founded a private firm. He served as Lieutenant Governor of Massachusetts under Michael Dukakis from 1983 to 1985, where he worked on an early forerunner to the national Clean Air Act. He won a tight Democratic primary in 1984 for the U.S. Senate and was sworn in the following January. On the Senate Foreign Relations Committee, he led a series of hearings from 1987 to 1989 which were a precursor to the Iran–Contra affair. He was an early backer of the 2003 invasion of Iraq, but became a strong opponent of the subsequent war.

FULL ARTICLE AT WIKIPEDIA.ORG
This article is licensed under the GNU Free Documentation License.
It uses material from the Wikipedia article "John Kerry."