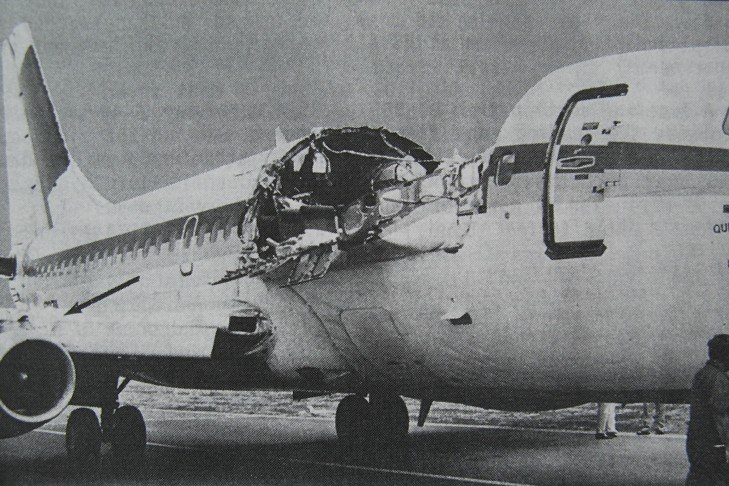 On April 28, 1988, an Aloha Airlines Boeing 737 lost a section of its roof at 24,000 feet between Hilo, Hawaii, and Honolulu, killing a flight attendant. File Photo courtesy of the National Transportation Safety Board

In 1788, Maryland ratified the U.S. Constitution, becoming the seventh state of the Union.

In 1789, the most famous of all naval mutinies took place aboard the HMS Bounty en route from Tahiti to Jamaica.

In 1915, the International Congress of Women, convening in The Hague, selected Miss Jane Addams of Chicago as its permanent chairman.

In 1930, the first night game in organized baseball history was played in Independence, Kan.

In 1945, fascist leader Benito Mussolini, his mistress and several of his friends were executed by Italian partisans.

In 1947, Thor Heyerdahl and five crew members began a trip from Peru to Polynesia on the Kon-Tiki, a raft raft made of balsa logs and other natural materials. The voyage covered 4,300 miles over 101 days.

In 1955, the Public Health Service urged parents to move swiftly in having their children vaccinated for polio.

In 1975, North Vietnamese forces advanced to the outskirts of Saigon in the Vietnam War. Two days later, South Vietnam surrendered.

In 1988, an Aloha Airlines Boeing 737 lost an 18-foot section of its roof at 24,000 feet between Hilo, Hawaii, and Honolulu, killing a flight attendant. The pilot landed on Maui with the remaining 94 passengers and crew members, 61 of them injured.

In 1994, former CIA officer Aldrich Ames pleaded guilty to spying for the Soviet Union. He was sentenced to life in prison.

In 1995, an underground gas explosion at a subway construction site killed about 100 people in Taegu, South Korea.

In 1996, a rampage by a gunman in Port Arthur, Tasmania, Australia, killed 35 people.

In 2001, California businessman Dennis Tito became the first tourist in space. He reportedly paid Russia's space agency $20 million to give him a ride to the International Space Station.

In 2005, a Shiite-led Cabinet was approved by Iraq's National Assembly for its first freely elected government.

In 2009, U.S. Sen. Arlen Specter of Pennsylvania, winding up his fifth term as a Republican stalwart, announced he would seek re-election in 2010 as a Democrat, switching parties because he found himself "increasingly at odds" with the Republican Party.

In 2009, three Albanian immigrant brothers were sentenced to life in prison for their part in a plot to attack soldiers at Fort Dix.

In 2013, renowned concert cellist Janos Starker, who gave his first public performance at age 6 as a child prodigy in Hungary, died in Bloomington, Ind. He was 88.

A thought for the day: H. Jackson Brown Jr. said, "Our character is what we do when we think no one is looking."

U.S. News // 2 hours ago
Texas state court throws out lawsuit against doctor who violated abortion law
Dec. 8 (UPI) -- A judge in San Antonio has thrown out a lawsuit filed against a Texas abortion provider who intentionally violated a controversial state abortion law.

U.S. News // 7 hours ago
Two white supremacist gang members sentenced
Dec. 8 (UPI) -- Two members of the Aryan Circle, a white supremacist prison gang, have been sentenced for crimes committed as part of their roles in the organization.

Volcanic activity occurring all around the world