Striker Wahbi Khazri of Tunisia his goal against France at the 2022 World Cup on Wednesday at Education City Stadium in Doha, Qatar. Photo by Tolga Bozoglu/EPA-EFE

Nov. 30 (UPI) -- Tunisia netted a World Cup upset of France on Wednesday in Ar Rayyan, Qatar, but still didn't secure enough points for a spot in the Round of 16. France and Australia earned Group D's two tickets for the knockout stage.

Striker Wahbi Khazri scored the lone goal in Tunisia's 1-0 victory over the reigning World Cup champions at Education City Stadium. The French, ranked No. 4 in the world, won their previous two matches and claimed the Group D title.

No. 38 Australia also upset No. 10 Denmark 1-0 on Wednesday in Al Wakrah to finish second in Group D. No. 30 Tunisia finished third, with one win, one loss and one tie in the group stage.

The Tunisian defense smothered early on, holding the French to their fewest shots (2) in the first half of a group stage match since the 1966 World Cup. Neither French attempt was on target. France held a 58% to 42% edge in time of possession over the first 45 minutes.

As it stands Tunisia is through to the knockout stage pic.twitter.com/qSwvafgY16— FOX Soccer (@FOXSoccer) November 30, 2022

The Tunisians appeared to grab the lead in the eighth minute when fullback Nader Ghandri netted a volley past French goalie Steve Mandanda. That goal was taken off the scoreboard due to an offside call.

Khazri then broke the deadlock with a sensational score in the 58th minute. The play started with a France turnover at midfield. Midfielder Aissa Laidouni then played a pass to Khazri between midfield and the France box.

Khazri received the ball, did a quick turn and bolted forward with his dribble. He then used a heavy right-to-left touch to clear French defender Raphael Varane. He then used the small opening to poke a left-footed grounder between several defenders and just inside the right post.

The French attack registered eight shots in the second half, with three on target. The French appeared to net an equalizer in the in stoppage time.

Striker Antoine Griezmann hit a shot into the net with his right boot in the eighth minute of stoppage time during that sequence. That score was later reviewed and removed from the scoreboard.

France will face vs. Group C runner-up Sunday at Al Thumama Stadium in Doha. Australia will battle the. winner of Group C on Saturday at Ahmed bin Ali Stadium in Al Rayyan.

Poland, the first-place team in Group C, will face second-place Argentina at 2 p.m. Wednesday in Doha. Third-place Saudi Arabia also will face last-place Mexico at the same time in Lusail. 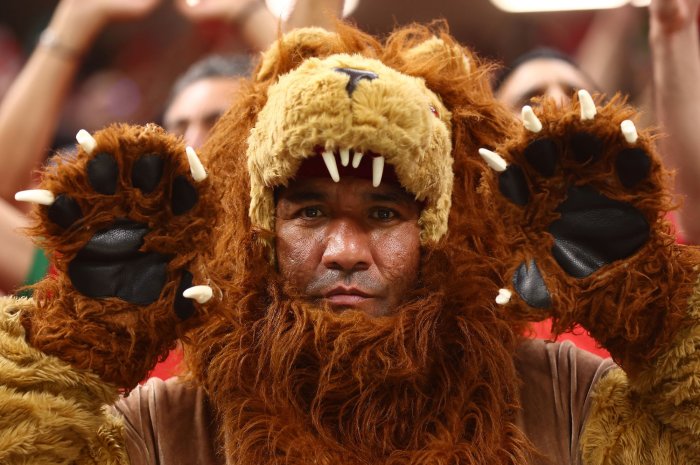 A Morocco fan supports his team while wearing a costume during the 2022 FIFA World Cup Semi-Final match between Morocco and France at Al Bayt Stadium in Al Khor, Qatar, on December 14, 2022. Photo by Chris Brunskill/UPI | License Photo

World Cup 2022: Injured Christian Pulisic says he 'will be ready' for USA vs. Netherlands

World News // 55 minutes ago
Eurozone inflation eases for third straight month, falls to 8.5%
Feb. 1 (UPI) -- The eurozone's annual inflation rate continued on its downward track last month, the third successive month that the pace at which prices are increasing has slowed, according to European Union figures out Wednesday.

U.S. News // 57 minutes ago
California defies Western neighbors, submits separate Colorado River rescue plan
Feb. 1 (UPI) -- California submitted its own plan to cut water usage from the Colorado River -- defying a proposed deal with the U.S. by six other Western states in a race to save one of the nation's most critical natural resources.

U.S. News // 1 hour ago
Coast Guard rescues four from disabled boat off of Mississippi
Feb. 1 (UPI) -- The U.S. Coast Guard said on Tuesday it rescued four people on a disabled boat in the Gulfport Shipping Channel in Mississippi after they did not return as expected.

U.S. News // 3 hours ago
Gun groups sue Biden administration over rule on stabilizing braces
Feb. 1 (UPI) -- Gun rights activists have filed a pair of lawsuits seeking to challenge a Biden administration rule requiring gun owners to place firearms that can be modified to become rifles on a federal registry.

World News // 3 hours ago
Missing radioactive capsule found by side of Western Australia highway
Feb. 1 (UPI) -- Australian authorities scouring hundreds of miles of highway for a radioactive capsule that fell off the back of a truck last week while in transit has been found, officials said.

Health News // 5 hours ago
U.S. leads wealthy nations in healthcare spending but life expectancy lags
The United States spends up to four times more on healthcare than most wealthy nations, but it doesn't have much to show for it.