MIAMI, Sept. 30 (UPI) -- Miami Dolphins quarterback Tua Tagovailoa has headaches after he sustained a concussion and is out indefinitely amid an NFL probe into the team's adherence to the concussion protocol, coach Mike McDaniel said Friday.

"I'm not even thinking about timetables as a player," McDaniel told reporters in Miami Gardens, Fla. "It's about Tua as a person. We're just worried about him getting healthy and getting all of the testing done. We'll cross the bridge on timetables."

Tagovailoa sustained a hit to his head for the second straight game in the first half of the Dolphins' loss to the Cincinnati Bengals on Thursday in Cincinnati. He left the game on a stretcher less than six minutes before halftime.

Tagovailoa was treated at the University of Cincinnati Medical Center, later released and traveled back with the team Thursday night to Miami.

"His teammates or me, I'm not sure who was most excited to see him on the plane," McDaniel said. "He was was honest about the fact that he had a headache, but his personality was definitely normal Tua.

"Talking to him this morning, I think he is still feeling some of those headaches. He is probably just finishing an MRI right now. We will find out results on that. That is an extra precaution on top of CT scans and X-rays taken last night."

Tagovailoa had the first of what the team initially deemed a "head injury" in the first half of the Dolphins' Week 3 win over the Buffalo Bills on Sunday, but cleared the protocol and was allowed to return to that game, which prompted the NFL-NFLPA joint investigation.

He then started four days later against the Bengals and was hurt again.

"Player health and safety is at the core of the union's mission," the union said Thursday night. "Our concern is for Tua, and we hope for a full and speedy recovery.

"Our investigation into the potential protocol violation is ongoing."

From @GMFB: The latest on #Dolphins QB Tua Tagovailoa, who was released from the hospital last night and flew back with the team. pic.twitter.com/aG3UEDDcs9— Ian Rapoport (@RapSheet) September 30, 2022

Bengals defensive tackle Josh Tupou, who weighs 320 pounds, sacked Tagovailoa on Thursday, leading to his early exit. The quarterback then hit his back and the back of his head on the turf. His arms appeared to seize up in front of his face.

He was he was loaded onto the stretcher and transported by ambulance to the University of Cincinnati Medical Center for observation.

The Dolphins said Tagovailoa was conscious and had movement in all extremities.

The Dolphins and NFL were heavily criticized on social media, by fans, former players, medical professionals and others Thursday night and Friday morning, for allowing Tagovailoa to play after another scary scene from the quarterback in Week 3.

Tagovailoa took a hit on that play just before halftime against the Bills on Sunday in Miami Gardens. He climbed to his feet and appeared unbalanced, stumbling backward. He then attempted to job, but collapsed on the ground. Tagovailoa's teammates held him up, and he was taken to the locker room.

He then ran out of the tunnel and returned to the game in the third quarter after the team said he passed the concussion protocol.

The Dolphins, Tagovailoa and coach Mike McDaniel later said Tagovailoa sustained a back and neck injury during the collision. Tagovailoa admitted he he also hit his head on that play.

McDaniel reaffirmed that the Dolphins followed protocol precautions throughout the last week since Sunday. He said Tagovailoa did not sustain "any head injury whatsoever" against the Bills.

"There was no medical indication from all resources that there was anything regarding the head," McDaniel said. "If there would have been, of course, anything lingering with his head, I wouldn't have been able to live with myself."

The NFL concussion protocol was developed by a board of independent and NFL-affiliated physicians and scientists, including advisors for the players union.

"That's why the NFL has the protocols for every game that is played," McDaniel told reporters Thursday. "There is an independent specialist that specializes in a specialty of brain matter [as part of protocol examinations].

"For me, as long as I'm coaching here, I'm not going to fudge that whole situation. If there's any sort of inclination that someone has a concussion, they go into the concussion protocol and it's very strict.

"We don't mess with that. I never have and as long as I'm the head coach, that will never be an issue you guys have to worry about."

Former NFL tight end Benjamin Watson, a previous member of the players' union's executive committee, was among the ex-NFL players who opposed the decision to allow Tagovailoa to play Thursday in Cincinnati.

Longtime NFL quarterback Robert Griffin III also said the Dolphins have to "answer" for the decision to play Tagovailoa four days after his previous injury.

"I know what I saw, and Tua was concussed last week," Watson tweeted. "The fact that he was able to return to play is everything that's wrong with the game so many of us love.

"A full investigation is forthcoming. Praying for this young man right now. This is awful to witness."

Former NFL team doctor David Chao released a video for Sports Injury Central on Thursday night and said Tagovailoa's finger posturing "can't be explained away" by back, neck injuries or anything except "neurologic issues." He also said "second impact syndrome" is a "greater concern" for the quarterback.

Second-impact syndrome is a condition in which an individual experiences a second head injury before completely recovering from an initial head injury. The syndrome is rare, but can be deadly.

Chris Nowinski, a behavioral neuroscientist from Boston University and the chief executive of the Concussion Legacy Foundation, also criticized the team for clearing Tagovailoa for the Week 4 game.

"This is a disaster," he posted on Twitter. "Pray for Tua. Fire the medical staffs and coaches. I predicted this, and I hate that I am right."

Nowinski also said before the game that Tagovailoa should not play and that a second concussion could "destroy his season or career."

The NFL and players union told UPI earlier this week that it launched the joint-investigation into the adherence to the protocol. The investigation is expected to last two weeks.

NFL executive vice president of communications, public affairs and policy Jeff Miller told reporters Wednesday on a conference call that "every indication" is that the league protocols were followed after Tagovailoa sustained his Week 3 injury.

NFL chief medical officer Dr. Allen Sills told NFL Network on Friday that Tagovailoa was checked for concussion symptoms daily since Sunday. He also was cleared by an neurotrauma expert. Sills also said the results of the NFLPA-NFL investigation will be released publicly.

Players who undergo any concussion evaluation on an NFL game day also are required to have a follow-up evaluation conducted the next day by a member of their medical staff.

"I could tell it wasn't the same guy that I was used to seeing," McDaniel said of Tagovailoa on Thursday in Cincinnati. "It was a scary moment. He was evaluated for a concussion. He's in the concussion protocol, but he's being discharged.

"It's an emotional moment. It's not a part of the deal you sign up for. His teammates and myself were very concerned, but he got checked out and it's nothing more serious than a concussion."

The NFL announced in February that 187 concussion occurred during the 2021 season, including in practice, preseason and regular-season games. That total was up from 172 in 2020, the pandemic-shortened campaign, which did not feature preseason games.

Before the 2021 season, the players union reported that an average of 247 concussions per season over a five-year span. 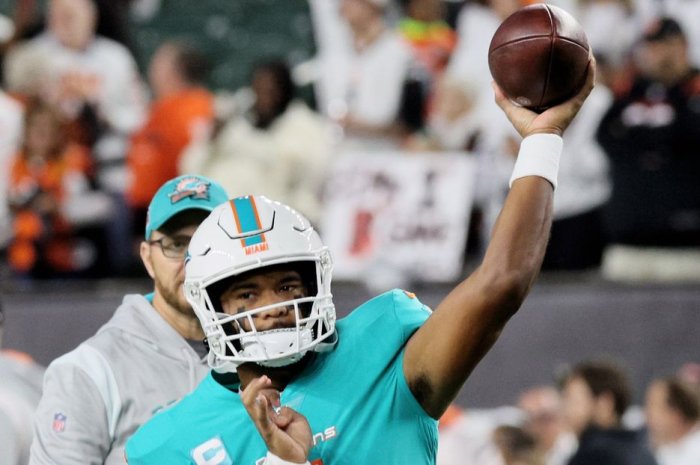 Miami Dolphins quarterback Tua Tagovailoa throws before the game against the Cincinnati Bengals at Paycor Stadium in Cincinnati on September 29, 2022. Tagovailoa played four days after he suffered what the team initially said was a "head injury." Photo by John Sommers II/UPI | License Photo
Advertisement

NFL // 2 days ago
Steelers overcome Colts rally, earn fourth win
Nov. 29 (UPI) -- The Pittsburgh Steelers jumped out to an early lead, overcame a late rally and took the final edge on a Benny Snell touchdown with 10 minutes remaining to beat the Indianapolis Colts in the NFL's Week 12 finale.