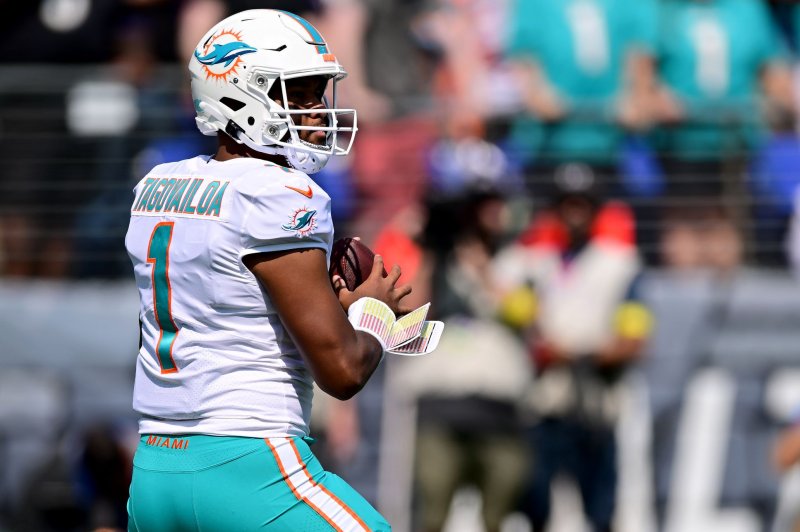 Miami Dolphins quarterback Tua Tagovailoa sustained a back injury in the first half of a win over the Buffalo Bills on Sunday in Miami Gardens, Fla. File Photo by David Tulis/UPI | License Photo

MIAMI, Sept. 26 (UPI) -- The NFL and the players' association will review the Miami Dolphins' handling of quarterback Tua Tagovailoa through the concussion protocol in Week 3, the league and players union confirmed Monday.

Teams previously determined to have failed to properly follow concussion protocols have been fined.

Tagovailoa sustained what the Dolphins initially called a "head injury" near the end of the first half of a win over the Buffalo Bills on Sunday in Miami Gardens, Fla. The Dolphins quarterback said after the game that he hit his back and head during a quarterback sneak.

Tagovailoa stood up and jogged back toward his huddle during the second-quarter sequence, but stumbled and fell back on the ground.

Trainers then escorted Tagovailoa off the field and into the tunnel, and he was deemed questionable to return. Tagovailoa jogged back out of the tunnel with teammates in the third quarter and returned to the game.

Tagovailoa and coach Mike McDaniel said after that the quarterback sustained a back injury and passed through the concussion protocol.

NFL player health and safety guidelines state that players who demonstrate "gross motor instability," or stumbling or falling when trying to stand, are required to be evaluated to determine the cause of the instability.

If the team physician and an unaffiliated neurotrauma consultant determine the instability is neurologically caused, the player is designated as a "no-go" and can't return to the game.

Players who undergo any concussion evaluation on an NFL game day also are required to have a follow-up evaluation conducted the next day by a member of their medical staff.

Tagovailoa told reporters at his postgame news conference that he "felt like" he hyperextended his back during the injury sequence. He also said he felt "good," but his back was tight and sore.

"When he hit his head on the ground, I assumed it was a head injury, but his legs got wobbly because his lower back was completely loose and as he described it, he said his lower back was like Gumby or something," McDaniel told reporters.

Tagovailoa, who threw a career-high six touchdowns in Week 2, completed 13 of 18 passes for 186 yards and one score Sunday in Miami Gardens. The Dolphins (3-0) are the lone undefeated team in the AFC. They will take on the Cincinnati Bengals (1-2) on Thursday in Cincinnati.

The week in the National Football League

NFL // 15 hours ago
Super Bowl: Kelce brothers root for each other as teams prepare to battle
PHOENIX, Feb. 8 (UPI) -- Jason Kelce and Travis Kelce won't discuss strategies for when the Philadelphia Eagles and Kansas City Chiefs battle Sunday in Super Bowl LVII, The brothers said they will still root for each other in the game.

Super Bowl: Kelce brothers root for each other as teams prepare to battle