March 25 (UPI) -- The New York Giants have agreed to a contract with former XFL defensive back Dravon Askew-Henry.

Sources told NFL Network and the New York Daily News that Askew-Henry agreed to a two-year pact with the NFC East franchise. Askew-Henry appeared in five games for the XFL's New York Guardians before the 2020 season was canceled due to the coronavirus outbreak.

Askew-Henry had 208 total tackles, 155 solo tackles, 10 passes defensed, 9.5 tackles for a loss, six interceptions and a touchdown in 49 games during his four-year collegiate career at West Virginia. He was an undrafted rookie free agent last off-season before spending time in Pittsburgh Steelers training camp.

Askew-Henry is a distant cousin to former New York Jets star cornerback Darrelle Revis, with his uncle married to Revis' mother. He told the Daily News he has had a close relationship with Revis for most of his life. Revis also helped Askew-Henry prepare for the 2019 NFL Draft.

"He helped me mentally, was showing me how to eat, being a mentor," Askew-Henry told the Daily News. "Me and Darrelle are close. We were family even before we were family. He lived up the street from me my whole life. We've been close for so long."

Askew-Henry has played at both safety and nickel cornerback. He was credited with 11 total tackles and six pass breakups during his XFL campaign. Five of those passes defensed came in his final XFL game, a 30-12 win against the Dallas Renegades March 7 at Globe Life Park in Arlington, Texas.

Askew-Henry is one of several former XFL stars who have agreed to NFL contracts over the last few days. Star quarterback P.J. Walker was the first player to agree to an NFL contract, joining the Carolina Panthers. Former St. Louis BattleHawks quarterback Jordan Ta'amu agreed to a contract Monday with the Kansas City Chiefs. Former XFL defensive back Deatrick Nichols agreed to join the New Orleans Saints on Monday. 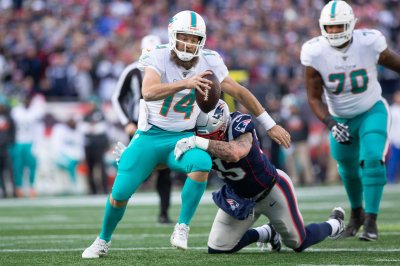