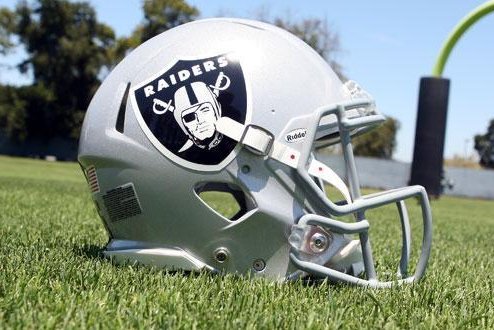 Photo courtesy of the Oakland Raiders/Twitter

The Oakland Raiders placed starting tackle Donald Penn on Injured Reserve on Wednesday because of a groin injury sustained on Sunday against the Cleveland Browns.

The 35-year-old Penn left the game in the first half but later returned, but left the game again and went to the locker room. Head coach Jon Gruden said the Raiders hope Penn can return later in the season.

Gruden said rookie Brandon Parker, selected by the Raiders in the third round (No. 65 overall), will replace Penn in Sunday's game against the San Diego Chargers.

That will give the Raiders rookies at both tackle spots, with No. 1 pick Kolton Miller out of UCLA on the left side.

Parker, who was slowed by an ankle injury early this season, played 57 of 92 snaps against the Cleveland Browns on Sunday in his first appearance with the offense in the NFL

"We're confident (in Parker)," Gruden said. "He's back, he's healthy and he played pretty good when he got in there and played. This will be a great opportunity for him."

Penn, an 13-year-veteran, started at left tackle the last four seasons for the Raiders and made the Pro Bowl in the last two, but agreed to move to right tackle this season after Oakland drafted Miller.

To fill Penn's spot on the roster, the Raiders signed tackle Ian Silberman off the Tennessee Titans practice squad to fill his roster spot.

Silberman was with the Raiders the last two training camps and was on the team's active roster last December and on the initial 53-man roster on Sept. 1 before being waived. He started at right tackle for the Raiders in their first two exhibition games this season.

NFL // 2 weeks ago
Broncos WR Jerry Jeudy released from jail, faces domestic-related charge
May 13 (UPI) -- Denver Broncos wide receiver Jerry Jeudy was arrested on misdemeanor charges, jailed overnight and released Friday after he was accused of withholding property from the mother of his child, a police spokesman told UPI.

NFL // 2 weeks ago
2022 NFL schedule release: Bills-Rams to kick off season; Broncos-Seahawks on 'MNF'
May 12 (UPI) -- The NFL will open its 2022 regular season inside Los Angeles' SoFi Stadium, as the defending Super Bowl champion Rams will host the Buffalo Bills on Thursday, Sept. 8.
Advertisement