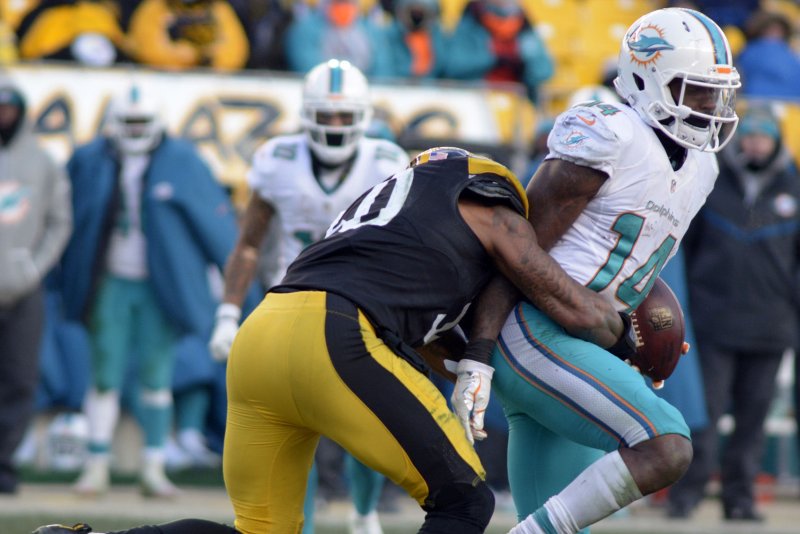 Jan. 24 (UPI) -- The Baltimore Ravens spoke to the Miami Dolphins last offseason about a deal for Jarvis Landry, according to a report.

A source told the Baltimore Sun that the team found the Dolphins' asking price "to be prohibitive." Landry, 25, is now a free agent. The two-time Pro Bowl selection had a league-high 112 receptions this season. He also had 987 yards and a career-best nine touchdowns in 16 games for the Dolphins.

The Ravens ended up signing Jeremy Maclin last offseason, in lieu of not getting Landry. Maclin finished the season with 440 yards and three scores on 40 catches in 12 appearances for Baltimore. He joined the squad on a two-year, $11 million pact.

Landry played out the final year of his rookie deal in 2017.

The Ringer reported last offseason the Dolphins would listen to offers on Landry. That report also stated that the team had "made it known" they would move the wide receiver for the right price.

"They are as active as other teams talking," the Ringer reported.

Dolphins brass told the Miami Herald in August that there was "no chance" Landry was being traded. The Dolphins also called the report "100 percent untrue," according to the Herald.

Last week, Landry's agent Damarius Bilbo told the Palm Beach Post that his client will not take a discount to stay with the Dolphins. Bilbo and Landry are waiting on the franchise to respond to his contract proposal.

Miami re-signed wide receiver Kenny Stills on a four-year, $32 million pact in March. DeVante Parker, the No. 14 overall pick in the 2015 NFL Draft, has a year remaining on his rookie deal. He also has a team option in 2019.

Parker, 25, had a career-high 57 receptions on 96 targets this season. He turned those targets into 670 yards and just one touchdown.

On Jan. 2, Dolphins coach Adam Gase wouldn't speculate on what the team would look like without Landry.

"I wouldn't go into hypotheticals of what we would look like without him," Gase said. "I know that he's had a lot of production, done what - as far as what we asked him to do - this offense kind of works with him well and suits him well."

On Jan. 4, ESPN reported Maclin is a "top candidate" to get cut by the Ravens. He receives a $1 million roster bonus on March 16.

Mike Wallace led the Ravens with 748 receiving yards this season, but is now a free agent. Chris Moore, the wide receiver with the third-most yards last season for the Ravens, is under contract through 2019. Former Ravens first round pick Breshad Perriman is on the final year of his rookie contract, but has a team option for 2019.