Houston Rockets guard Kevin Porter Jr. (3), shown April 9, 2021, left the arena during Saturday's game against the Denver Nuggets after an argument in the locker room at halftime. File Photo by Etienne Laurent/EPA-EFE

Porter and Wood both traveled with the Rockets to Philadelphia on Sunday, but Rockets head coach Stephen Silas opted to sit them for Monday's matchup against the Sixers after separate incidents over the weekend.

The duo didn't play in the second half of the Rockets' loss to the Nuggets due to their episodes. ESPN and The Athletic reported that Porter left the arena after a confrontation with assistant coach John Lucas at halftime of that game.

Porter became enraged after Lucas challenged him at halftime, revisiting an issue that led the 21-year-old guard to lose his composure on the bench during the opening half.

Silas told reporters Monday that Porter was involved in a "spirited debate" and "lost his temper" at halftime, "to the point where I thought what would be best for the team and best for our culture as a group, and just making sure that everybody is on the same page, I thought it would be best for him to be suspended for today's game."

Silas noted that the one-game suspensions were about "accountability," adding that both players accepted their punishments without issue.

"He is emotional," Silas said of Porter, who has dealt with anger management issues in his career. "He's a competitor. He's a good kid. He owns up to his mistakes when he makes them and tries not to make mistakes again. That's pretty much all you can ask from a guy.

RELATED Cavaliers' Ricky Rubio out for season with torn ACL

"Yeah, we put a lot into him. We knew that he had a past before he came here. But, we hold everybody accountable to what they do. He crossed a line and he'll be back. And we'll still love him."

Wood, meanwhile, was benched to start Saturday's game against Denver for failing to show up for the Rockets' daily COVID-19 testing, which caused Houston's team shootaround to be delayed.

Later in Saturday's matchup, Wood showed little desire to check into the game when Silas called upon him, and the coach quickly moved on to other players in the lineup. According to ESPN, Lucas also confronted Wood at halftime and challenged him.

Wood, who is the Rockets' leading scorer and rebounder, played eight scoreless minutes in the first half against the Nuggets. Houston was outscored by 17 points when he was on the floor.

"We had a disagreement as far as him going back into the game in the second half, and I decided it would be best for the team [to suspend him]," Silas said. "It's very much attached to accountability for everybody on our team. My job is to hold people accountable to their actions and not overreact at all, but react appropriately."

NBA // 6 hours ago
Duncan Robinson, Miami Heat blow out New York Knicks
MIAMI, Jan. 26 (UPI) -- Sharpshooters got the Miami Heat off to a quick start and the NBA's Eastern Conference leaders never looked back in a dominant 110-96 victory over the New York Knicks Wednesday at FTX Arena. 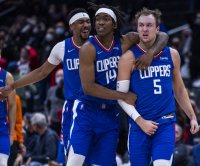