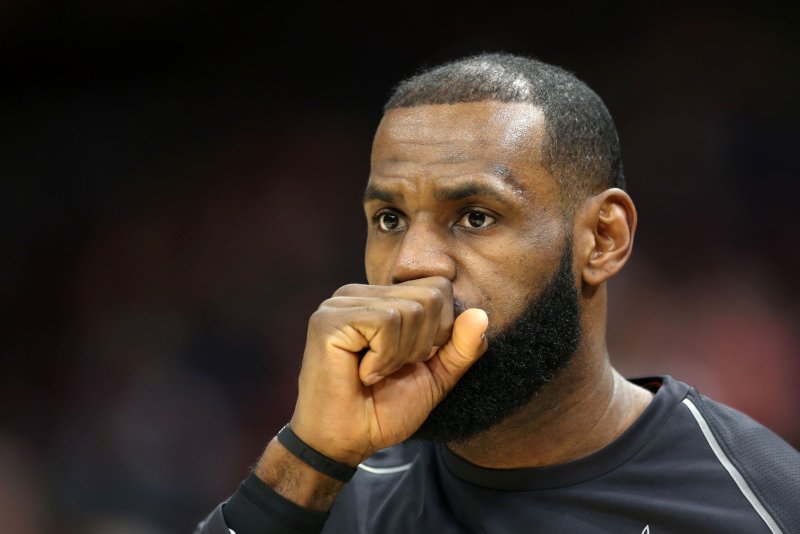 Cleveland Cavaliers' LeBron James looks on prior to the Cavaliers game against the Sacramento Kings Wednesday at Quicken Loans Arena in Cleveland, Ohio. Photo by Aaron Josefczyk/UPI | License Photo

CLEVELAND -- With the game and the Cleveland Cavaliers' winning streak on the line, LeBron James told his coach he wanted the ball.

Who was Tyronn Lue to say no?

Lue called the play James wanted, and the Cavaliers superstar buried a 3-pointer with 16.6 seconds left to cement a 101-95 win over the Sacramento Kings on Wednesday.

The win was Cleveland's 13th in a row, tying a franchise record.

There was about five seconds left on the shot clock when time was called with 20.6 seconds left and the Cavs clinging to a two-point lead.

Lue said he intended to call a different play in the huddle, but James wanted "Chicago," a play named for James' turnaround jumper at the buzzer in Game 4 of the 2015 conference semifinals that beat the Bulls.

The Cavs fell behind by as many as 14 in the third quarter and were trailing 78-73 heading to the fourth. Kyle Korver opened the final frame with three consecutive 3-pointers, and Cleveland was ahead 82-79 in 83 seconds.

James scored the last five points, with a driving skyhook before the dagger 3-pointer. He said he knew the ball was going through the hoop.

Kevin Love scored 18 points and grabbed 13 rebounds for the Cavs, while Jeff Green scored 17 off the bench and Korver added 15 points.

The Cavs can set a franchise win-streak record Friday against the Indiana Pacers. Cleveland set its current record in March 2009 and tied in January and February 2010.

"We don't really talk about the streak," Korver said. "I think everybody feels really good in their role right now. And everyone's excited to play every night. Guys are locked in. And it's the old cliche of take it one game at a time, but we're enjoying each game right now as a team. As long as we keep doing that, we think we have a great team and we should keep on winning."

Zach Randolph paced the Kings with 18 points, and Sampson set a career high with 16 rebounds. Sampson, who is from Cleveland and attended Akron St. Vincent-St. Mary High School like James, started at center Wednesday in place of the injured Willie Cauley-Stein.

Sampson spent much of the game guarding James.

"LeBron is one of the best players in the league, so you just have to make everything tough on him," Sampson said. "That's what I tried to do tonight, but we came up short."

Sacramento took a 57-48 lead into halftime. James scored nine straight points to cut Cleveland's deficit to 46-45 with 3:14 left and missed a free throw that could've tied it. Randolph scored seven points from that moment to the end of the half, and the Kings shot 14 of 21 overall in the second quarter.

The Kings shot 10 of 27 from the field and 2 of 11 from 3-point range in the first quarter and still led 22-19. James failed to score in the opening period and Love scored eight of the Cavs' 19 points.

Randolph, meanwhile, was held scoreless in the final quarter.

"We got a little slow," Sacramento coach Dave Joerger said. "Zach is our playmaker, and we need to get it to him earlier to draw two guys to him. We were just too late to do that."

NOTES: Kings C Willie Cauley-Stein (lower back strain) missed Wednesday's game and will be out again Friday against New Orleans, coach Dave Joerger said. Joerger said he didn't know if Cauley-Stein would be out longer than that. ... Cavs G Isaiah Thomas and C Tristan Thompson played in a four-on-four scrimmage Wednesday after the team's shootaround. Coach Tyronn Lue said Thompson would hopefully play this week and offered no new information on Thomas' return. Thompson injured his left calf Nov. 1, and Thomas has yet to play this season because of hip injuries. ... Kings F Zach Randolph returned to the starting lineup Wednesday after coming off the bench for the first time this season in the previous game. ... Cavs G Derrick Rose, who left the team Nov. 22 to consider retirement and returned to the organization Monday, addressed his teammates Wednesday for the first time since leaving. Rose remains out with a sprained left ankle. ... Sacramento recalled C Georgios Papagiannis from Reno of the G League with Cauley-Stein out.