Alex Bregman homers twice vs. Cubs, has record 12 May mashes 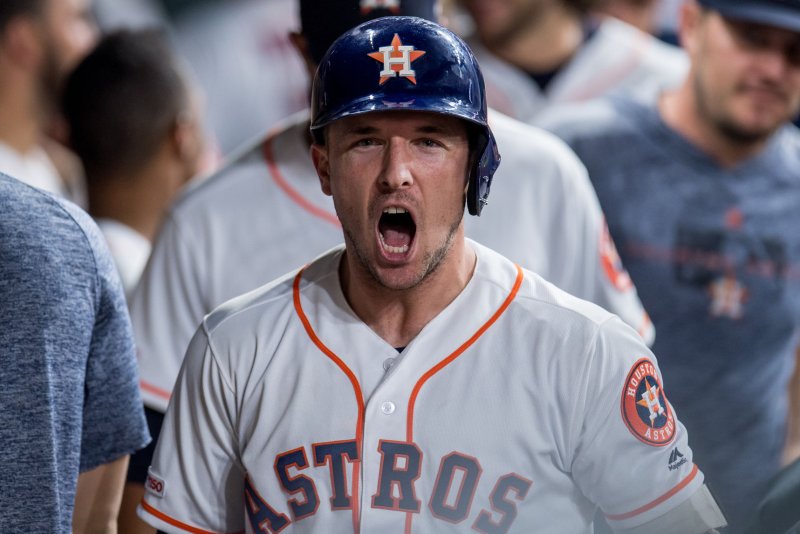 Houston Astros star Alex Bregman now leads the American League with 17 home runs this season after hitting two bombs in a win against the Chicago Cubs on Tuesday in Houston. Photo by Trask Smith/UPI | License Photo

May 29 (UPI) -- Houston Astros star Alex Bregman set a team record with his 11th and 12 home runs of the month in a win against the Chicago Cubs.

No Astros player had ever homered 12 times in May before Bregman accomplished the feat during the 9-6 triumph on Tuesday at Minute Maid Park in Houston. Bregman also has an American League best 17 homers on the season.

Houston grabbed an early lead on a first-inning RBI double from Yuli Gurriel, but the Cubs exploded offensively in the second inning.

Jason Heyward and Addison Russell led off the second frame with back-to-back homers for Chicago, giving the Cubs a 2-1 advantage. Daniel Descalso grounded out in the next at-bat, before David Bote also went yard with his fifth home run of the season.

Astros bats fell silent in the second inning, before Bregman bounced back in the third frame. The Astros designated hitter led off the bottom of the inning with his 16th home run of the season, sending a 2-0 Jon Lester sinker to right center field for a 376-foot solo shot.

Garrett Stubbs, Derek Fisher and Michael Brantley each stepped up in the fourth frame, helping the Astros post four runs and take a 6-3 edge.

But the Cubs answered again with David Bote and Kyle Schwarber hitting back-to-back bombs in the sixth frame, tying the score at 6-6.

Lester retired the first two Astros hitters he faced in the bottom of the sixth inning. The Cubs starter then walked Fisher. The Cubs pulled Lester for reliever Brad Brach, who settled in against Bregman. Brach tossed an 85.6 mph slider for his only offering of the exchange with Bregman. The Astros star yanked the pitch to right center field for another 376-foot blast. That Bregman bomb was of the two-run variety and gave the Astros an 8-6 edge.

Jake Marisnick doubled in the Astros' final tally in the bottom of the seventh inning.

Bregman was 2-for-4 with three RBIs, three runs scored, a walk and a strikeout in the win. He is hitting .271 on the season, in addition to his league-leading 17 home runs. Bregman is also up to 38 RBIs this year for the Astros.

Houston hosts Chicago in the final game of the series at 8:10 p.m. on Wednesday at Minute Maid Park.