MLB // 3 months ago
Rays one win from World Series after beating Astros in Game 3 of ALCS
The Tampa Bay Rays are just one win away from the World Series after they used a five-run sixth inning to beat the Houston Astros Tuesday night in Game 3 in the American League Championship Series.

MLB // 3 months ago
Houston Astros sweep Minnesota Twins to advance to ALDS
Nine months after Houston's illegal sign-stealing scheme was revealed, the Astros advanced to the AL Division Series with a 3-1 win over the Minnesota Twins on Wednesday at Target Field in Minneapolis.

MLB // 4 months ago
Astros' Framber Valdez strikes out 11 in rout of Angels
Starting pitcher Framber Valdez threw 11 strikeouts and allowed four runs in seven innings to lead the Houston Astros to an 11-4 rout of the Los Angeles Angels on Monday night. 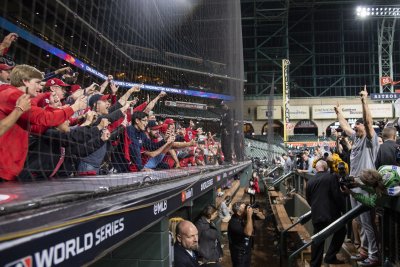 MLB // 1 year ago
World Series: Astros rebound for Game 3 win over Nationals
The Houston Astros climbed back into the World Series with a 4-1 win over the Washington Nationals on Friday night at Nationals Park to cut their deficit to 2-1 in the best-of-seven series.

Michael Charles Brantley, Jr. (born May 15, 1987 in Bellevue, Washington) is a Major League Baseball outfielder who plays for the Cleveland Indians. He is the son of former MLB player and coach Mickey Brantley.

Grew up in Port St. Lucie, Florida and attended school at Ft. Pierce Central High School as a star athlete.

He was drafted by Milwaukee in the seventh round of the 2005 amateur entry draft. In 2005 he played for their Rookie league Helena Brewers and Arizona Brewers. He was promoted to the Class A West Virginia Power in 2006. In 2007, Brantley split his time between West Virginia and the Double-A Huntsville. In 2008, he was involved in a trade that sent him and Matt LaPorta to the Cleveland Indians for C.C. Sabathia. Near the end of the 2009 season, he was called up to the Indians to replace the injured Grady Sizemore in center field. In his time there, he hit .313 with 11 RBIs. On July 4, 2010, he was called up to the majors again to fill in for the injured Shin-Soo Choo. Thus far in 2011, Brantley is having his best year, serving in left field and center field, and helping the Indians to a surprising start.

FULL ARTICLE AT WIKIPEDIA.ORG
This article is licensed under the GNU Free Documentation License.
It uses material from the Wikipedia article "Michael Brantley."
Back to Article
/