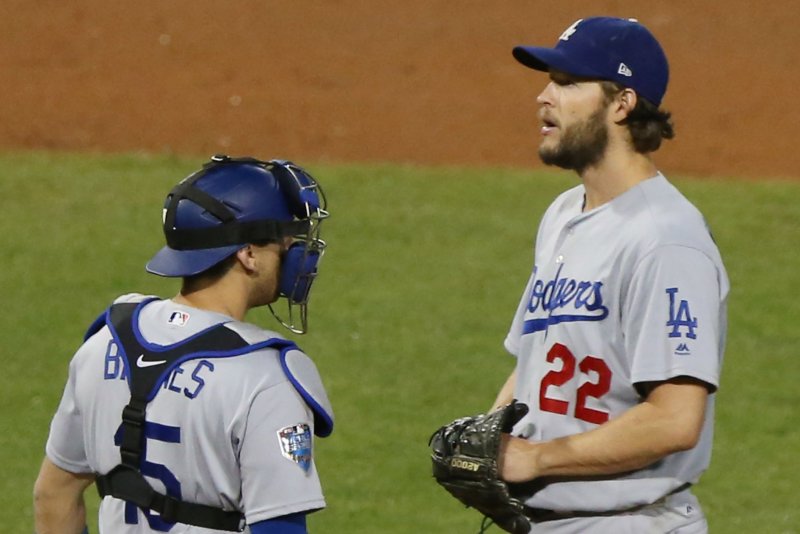 Los Angeles Dodgers starting pitcher Clayton Kershaw (22) is dealing with left shoulder soreness and has yet to appear in a spring training game in 2019. File Photo by Matthew Healey/UPI | License Photo

March 19 (UPI) -- Los Angeles Dodgers ace Clayton Kershaw will not start opening day for the first time in nine years after being ruled out for the start by manager Dave Roberts.

Roberts made the announcement regarding Kershaw on Monday. He did not say which pitcher would take the mound March 28 against the Arizona Diamondbacks.

The Dodgers skipper also ruled out Walker Buehler for opening day. Both pitchers are dealing with shoulder soreness in spring training. Buehler and Kershaw have yet to appear in a game.

Buehler is set to make his debut Tuesday against the Cleveland Indians. Kershaw is set to pitch batting practice Wednesday.

RELATED Dodgers SS Kyle Seager to be ready for the opener, manager says

"Talking to Clayton and, obviously, looking at the schedule, he's not going to start opening day," Roberts told reporters.

"To build him up and when he's ready to pitch for us is when he's going to pitch for us. He's supportive and he understands he wants to put himself in the best position to help himself and the ball club. When's he's built up to where he feels he can help us, then it's moot. We're all on the same page."

Kershaw is unlikely to be on the Dodgers' active roster at the start of the 2019 season. Ross Stripling will take his spot in the rotation.

Kershaw celebrated his 31st birthday Tuesday. The three-time Cy Young Award winner posted a 2.73 ERA and went 9-5 in 26 starts last season for the Dodgers. Kershaw led baseball with 18 wins in 2017. He also led the American League with a 2.31 ERA during his 2017 campaign.

The star southpaw is due $31 million annually through the 2021 season.